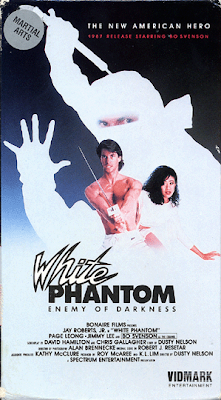 
When a bunch of ninjas in camouflage steal a box of weapons-grade plutonium, capable of a 5 megaton blast, from a truck driven by a slob eating a sloppy burger, the evil Sakura family goes from asking protection money from bookstores and nightclubs to the big leagues of international crime. Colonel Slater (Svenson) is on the case, chasing the nefarious family all over what we think is Japan (?) - and is using dancer Mei Lin as the undercover operative trying to get all the secrets she can from head of the family Hanzo (Jimmy Lee). Things get shaken up big time when a mysterious American stranger enters the picture...

Willi (Roberts Jr.) is an awesome dude with an attitude. He's the ultimate 80's coolguy, an unshaven cross between Keanu Reeves, Don Johnson and Bruce Willis. He even has a harmonica that he carries with him at all times. Talk about "The Return of Bruno"! He's charming, but kind of a jerk. He wears a Yankees baseball cap and a Sergio Leone-style duster coat. When he's not fighting Hanzo's stable of goons, he wants nothing more than to do some radically tubular slam dunks on the b-ball court and go to the local brothel. Is he just an American party animal? Or is there something more going on? He falls in love with Mei, which complicates matters between her, Hanzo and Slater. What is the secret of the mysterious Jay Roberts Jr.? Find out tonight!

Hanzo's goons are constantly playing rock paper scissors. One has a James Dean shirt, one resembles Oates, of Hall & Oates fame, and of course there is "Ears", a guy with not only a Hawaiian shirt, but also matching Hawaiian shorts who always has a Walkman on him. Hanzo has an interesting relationship with his controlling father, who we never actually see. He is the "White Phantom" equivalent of "Wilson" from "Home Improvement".

Willi (where's the final "e"?) even gets to say a great zinger to Hanzo when he shouts "Your triumph is your funeral, ninja!" And you thought English was his first language, unlike the rest of the cast (except Svenson).

As Mei Lin is a professional dancer, there are plenty of 80's dance sequences in the film. In fact, they pretty much replace action sequences until the climax, when the ninja action reaches its full capacity. In fact, "White Phantom" was released right smack dab in the middle of the famed 1980's Ninja Boom, where VHS boxes with the word "NINJA" emblazoned on them filled those beautiful video store shelves. Maybe they were trying for some kind of twist in the formula by including Roberts Jr. and not using the word "Ninja" in the title.

Go back to a time when the bad guys wear black and the good guys wear white in this (proudly stated on the box) 1987 release on Vidmark. Is Jay Roberts Jr. "The New American Hero"? Only you can be the judge.

Jay Roberts Jr. was clearly a national treasure and he, like so many others, should have gone on to be more well known. Find the Phantom tonight!