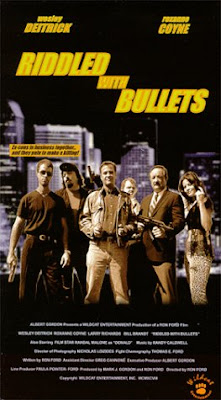 
Okay, the thing about "Riddled with Bullets" is that it is trying. And that's respectable. We really wanted to like it, and we gave it the benefit of every possible doubt, but sadly, the unvarnished truth is that "Riddled" is a piece of shot-on-video crud with very little redeeming value.

The action starts abruptly and without warning as a British guy named Morris goes around L.A. assembling a rag-tag team of ex-cons to pull off a heist for a wheelchair-bound millionaire named Cayman Lockyear, who resembles CNN's Wolf Blitzer. For a much better example of this type of plot setup, please see Maximum Force (1992).

*NOTE: The audio is so poorly recorded, it simultaneously buzzes AND much of the dialogue is unhearable. All names, or anything else we "heard" is...well...we did our best.

The cast of ex-cons is quite a motley one. The main character is one Nick Thorson, a divorced, suicidal alcoholic who looks like Jeff Fahey, has an estranged son, and looks spiffy in a bomber jacket. Next is an assassin in a suit who looks like Dick Butkus named Lenny Gorman. The third is an incredibly obnoxious serial killer named Eel Baker. Fourth (and first of three fat guys) is the fat guy who knows karate, named Vinmont. He is the strong, silent type whose idol is clearly Sammo Hung. Fifth is an overweight, homosexual mad bomber with bizarre, fake-looking facial hair named Donald Martin who screams all his lines. The rumor that he had surgery to look like a cross between Bruce Vilanch and Captain Lou Albano (as Mario)seems to be unfounded. His cartoonish red dynamite is very real however. The token woman is named Cynda, who seems to be a prostitute who kills her johns with a sharpened hairbrush. The seventh and final member is the third fat guy, Billy Heard, a mechanic who is to be the getaway driver. The unofficial group member is a young boy with special needs who Eel insensitively calls "The Retard".

Directed by Morris and Lockyear, all these personalities hole up in an abandoned warehouse (of course), and are told their mission: if they steal an important computer chip from his rival Winston Forsythe and his company Del Toro industries (Lockyear impresses upon them the importance of "shareware"), they will each get a million dollars. But will all these crazy characters survive the run-up to the heist all living in the warehouse? Will they get the computer chip? Or is there a more sinister motive at work somewhere within their ranks?

Oh, Quentin Tarantino, what hath you wrought? Director Ron Ford seems to be going for a Reservoir Dogs (1992) type of thing here, and an attempt seems to have been made at a "neo-noir" vibe, but somehow it all doesn't seem to work. Technical problems like the loud, buzzing and muffled sound, boom mike shadows, harsh, unpleasant and fuzzy video quality and other amateurish, no-budget pitfalls aside, it's good that at least Ford got this movie out there. I congratulate him and his cast and crew for their effort, and that's pretty much the only place "Riddled with Bullets" gets an A. Unfortunately, effort alone doesn't make a good movie.

Speaking of Tarantino, in "Riddled" there are some stupid and unnecessary pop-culture references to things like Martha Stewart and Timothy McVeigh. Rather than try for something original, it seems like the makers of "Riddled" thought a worthy piece of entertainment consists of a bunch of unlikable non-actors screaming obscenities at each other for 80 minutes. That's "Riddled" in a nutshell. Just imagine the most bizarre episode of MTV's "The Real World" you've ever seen. Whether it is BETTER than an episode of "The Real World" is open to debate. On the bright side, in other movies there would have been ONE token fat guy. Proudly and boldly smashing the fat ceiling, in "Riddled" there are THREE. Your move, Tarantino. Also, fan favorite yell, "Nooooooo" is bellowed. And the character names are creative.

As much as we wanted to like "Riddled with Bullets", we should warn you that this video will hurt, then remove, your brain cells.

TECHNICAL NOTE: While the tape, and other sources claim the running time is 88 minutes, it is in fact 80 minutes in length.
Posted by Ty at 24.6.10