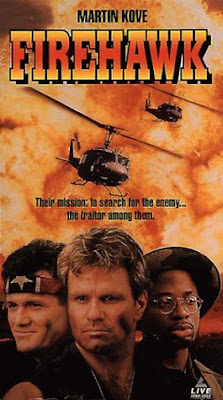 
In the vein of other Cirio H. Santiago movies such as Final Mission (1984) and Eye Of The Eagle 3 (1989), here we have another Vietnam escapade in the jungle.

Martin Kove of Shootfighter (1992) fame stars as Stewart, a rescue 'copter pilot with an attitude who chomps down on his cigar. He may have a rough n' tumble demeanor but he seems to know the score. His crew is comprised of Tex (Salinger), who loves nothing more than to shoot VC with his machine gun. At odds with him is the moral medic Davis (Carson). Li is a former VC working with them. There's also Hobbs and Bates. Another member of the team, Jimmy, who closely resembles comedian Nick Dipaolo, is injured. While he is recuperating at the army hospital, he gets closer and closer to the truth about "Firehawk".

When their Heli is grounded in the middle of the jungle, The team must overcome their internal squabbling whilst fighting the enemy. Is there a traitor in their midst? And what is the secret of the term "Firehawk"?

Kove gets to do his best Hannibal impression while he leads his own "A-Team". This includes "helicopter flying faces". Just imagine "guitar face" but with a Heli instead. The poor audio mixed with the constant helicopter sounds, mixed with constant shooting, mixed with the fact that Kove always has a cigar in his mouth, means much of his dialogue is unintelligible. One disappointing aspect of the movie is that Kove's name isn't "Firehawk". 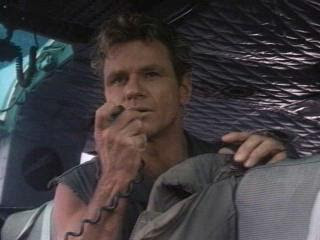 During one of their many gun battles, purple smoke starts billowing from the ground and someone says "it is a purple smoke trap!" Later, Carson gets to bellow fan favorite yell: "Nooooo!"

This 'Nam shoot-em-up reminds the viewer of classic NES shooters such as "Operation Wolf" and "Cabal".

Firehawk is a decent addition to the 'Nam movie boom of the late eighties and early nineties. It has more character development than most of its ilk. Yes, an endless amount of baddies get shot but an attempt is made at intelligence and plot twists.

Find out the secret of "Firehawk" tonight!

Sounds inferior to Missing in Action 2.