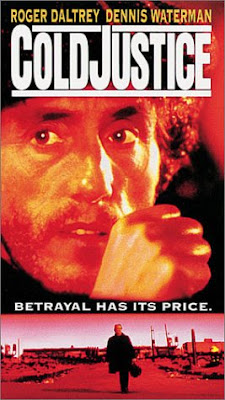 
"Betrayal has its price."

On the crime-ridden streets of Chicago, a mysterious man with a secret named Father Jim (Waterman) strolls into town and tries to make a difference. The only people he meets are worthless layabouts, drunks, and ex-boxer Keith Gibson (Daltrey). Gibson is down on his luck and is trying to get back into the fight game. The local drunks grow to love Father Jim because he drinks just like them. Jim runs afoul of some gangsters and the story comes to a tragic end.

You may have noticed the above plot description is kind of boring to read. Try watching it for a punishing hour and forty-five minutes! Cold Justice is a cliche-ridden slog of the lowest order. There is NO action. Yes, there is some punching by Who-man Roger Daltrey, but so what? It's at the end, and what person in their right mind would wait over 90 minutes to see some beyond-mild boxing action?

Nothing happens in Cold Justice. It goes around in circles so many times the viewer could become dizzy. Not to mention annoyed.

In this plodding exercise, Justice is a dish that ISN'T best served Cold.