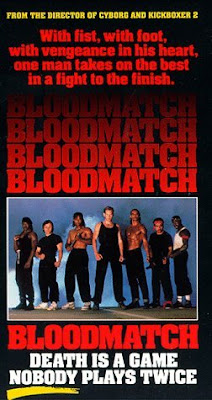 
Bad bad bad bad bad. "Bloodmatch" is another dud from the Albert Pyun canon. It's poor, even by his standards.

Apparently, an unlikable jerk named Brick Bardo (Mathews)(a common name if you watch Pyun movies) is trying to avenge the fact that his brother was caught up in some illegal fighting and got in trouble, even though his brother was innocent. So he and his partner Max (Marianne Taylor), a former nurse whose fight moves make her resemble a female Andy Bauman, go around drugging and kidnapping the people he thinks are responsible. He rents the entire Las Vegas arena for his own personal vendetta and forces Brent (Dale Jacoby), the smug, "Johnny Cage"-style fighter, Billy (Urquidez), a janitor, Mike (Thunderwolf), who is similar to "Street Fighter"'s Dee Jay, and Angel (Carlton), a Linda McMahon-style fight promoter, to fight him in the darkened arena, because for some reason he feels forcing them to fight him in the ring will bring him closer to the truth.

"Bloodmatch" is dour, dry, dark and overlong at 85 minutes. Bardo, the supposed "hero" is a hateful, spiteful, annoying and unsympathetic lead. The supposed "villains" are much more likable, so you have to question the entire enterprise. For example, Billy is a hard working janitor with a daughter. Bardo is a smug heel, and if he was a good, likable character you could get behind, that would make all the difference. But for no explained reason, he's not. Like Bardo himself and most of the other characters, the movie itself is unlikable. Apparently a hero would be too much to ask here.

You get the feeling Pyun doesn't know what he's doing and is not in control of the proceedings. The pacing is atrocious, it is glacial and the whole film feels like a slog. There are pages and pages of pointless, nonsensical exposition that no one cares about. The lighting is way too dark and grubby. There's a song in the movie, "In the Dark". Why rub it in?

Be warned: this movie is NOT a punchfighter. It is a fake, a disgrace to the word "punchfighting". Seeing as there is so much needless, brainless and juvenile dialogue, we have, unfortunately, stumbled upon a new breed of awful movie experience: the "talkfighter". When there are fights, the editing is jagged, with obvious frames removed. There are weak moves galore that don't connect. It is never explained why Bardo practically kills everyone with ease. It puts a sleeper hold on the audience. 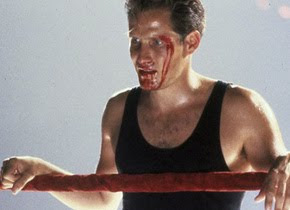 The whole time, the audience is treated like it is stupid. It also feels like Pyun has never even seen a fighting film before and just decided to make one out of the clear blue sky. The result is disastrous.

The only positive things you can say about "Bloodmatch" are that Urquidez does an impressive, if funny spin move, and the casting of Carlton, a Playboy girl, was smart as it keeps you from just ejecting the tape and setting it on fire with rage.

Your "blood" will boil if you watch this "match" tonight.

Comeuppance Review by: Ty and Brett
Posted by Ty at 6.7.10

I heard that this movie was quickly assembled while Pyun was filming Kickboxer 2. Apparently, it was filmed on the same set in a week. One of the most boring punchfighters ever made.

It definitely shows. This was more of a Talk-Fighter than a Punchfighter!