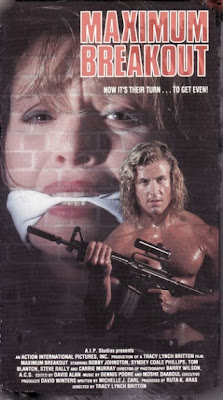 
One day Travis (Johnston) and Bobbi (Coale) are driving along in their car on a desolate stretch of road. Stopping to help what they think is an injured motorcycle driver, Bobbi is kidnapped and Travis is beaten up (he yells "Runnnnn! Runnnnnnn!" Very funnily). Six months later, he decides to do something about it, and he assembles a rag-tag team of commandos to find his beloved girlfriend. What is the secret of where Bobbi and numerous other women are being held captive? Will the team save them from the armed guards outside the mysterious compound?

Here is the team: Travis, who has a big blond mullet and looks like he tried out to be in an 80's hair band such as Ratt but failed, his buddy Reb (Hopper), "Suicide" McVie (Rally), a sex-crazed movie stuntman who looks like Norm McDonald as Burt Reynolds, Lonnie Loch (Blanton), a trigger-happy gun nut who resembles an unshaven Corey Feldman, and Professor (Keegan), the token computer nerd. They are helped along in their quest by Debbie (Murray), a woman who lets them stay at her house. For a better example of the "assembling a rag-tag team to go on a mission" movie, please see the fellow AIP title Night of the Kickfighters (1988). Maximum Breakout is silly, dumb, and even the title makes no sense whatsoever. How can a breakout be "maximum"? They do drink Mountain Dew, which makes them radically awesome, outrageous dudes in every way possible. So maybe that's what they were thinking.

Speaking of food products, there is a senselessly extended breakfast-making scene a la Stone Cold (1991), but in Stone Cold armed guards don't stand watch and make sure you eat your steak and eggs.

Professor can set off bombs pressing the space bar on his computer, which he uses in the woods. They travel in a van with numerous pro-life bumper stickers, which may or may not be foreshadowing. Many of the characters make stupid jokes so there is something of a sense of humor going on. Most of the male characters parade around shirtless for inordinately long amounts of time, for no reason. Good guys, bad guys, and even incidental characters are all seen shirtless. Why?

In the vein of Maximum Force's Bear and Provoked's Machine-Gun Joe, Maximum Breakout introduces the best character in the movie towards the end. A Cowboy named Dale Evans (McReynolds). He rides his horse in a continuous circle to confuse two guards of the compound, the ultimate dum-dums Jeff and Big Sam, and helps our heroes. He also has good manners.

Purely silly as only an AIP movie can be, we thoroughly recommend Maximum Breakout.

Comeuppance review by; Ty and Brett
Posted by Ty at 3.7.10

The music in that trailer is from Aliens.

I love how the concepts for the majority of these low-budget action movies seem to be conceived in about 10 minutes over two beers.

I have to say that your review made the movie appear a lot better than the trailer ever could.

Joe: Thanks! Sometimes our descriptions do inflate the movie's greatness a bit (unintentionally), but still, Maximum Breakout is pretty entertaining.