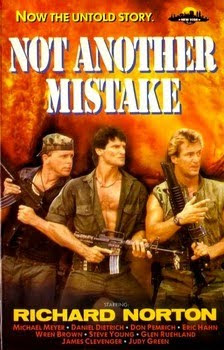 AKA: Not Another Mistake


Fan-favorite Richard Norton stars as "Straker" (Pronounced "Striker", of course. This IS an action movie), a Vietnam vet with a chip on his shoulder since his wife and daughter were killed in a home invasion. He is then recruited to go BACK to Vietnam to rescue some POW/MIA's, including one Commander, Harrison. Figuring he has nothing to lose, he accepts the mission. The officer that is overseeing the mission, McCloud (of course that's his name), chose him because he's the best (of course), having performed special ops in operation "Black Thunder" back in the day. So, Straker dramatically vows "Not Another Mistake" and he's on his way!

Naturally, he is assigned a ragtag team to help him. They get absolutely no character development, even by action movie standards. The only one that stands out is Soleri, an "Italian Stallion" clearly modeled after John Rambo. He announces himself as a "general bad-ass". So, there you go. 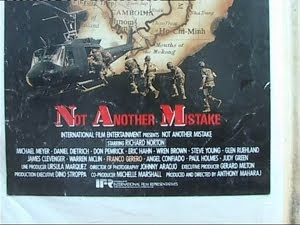 Can Straker hold the team together, save the prisoners, and kill thousands of baddies in the process? Will he be successful in his new mission, "Operation 8-ball"? Find out tonight! 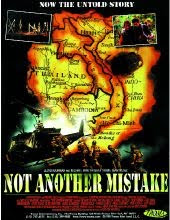 One thing doesn't make sense about Crossfire. If Straker and his team go BACK to Vietnam in the mid-to-late 80's, why are there thousands of Vietcong fighting them? Is the war still going on?

They had to do some contortions plot-wise to figure out a way to make proud Australian Richard Norton a member of the U.S. Military. Maybe the armed forces were confused because he looks like fellow armed forces member, Andy Levy of Fox News' Red Eye. He is so much of an exact doppelganger, it is truly uncanny. You expect at any moment he will break into the halftime report. 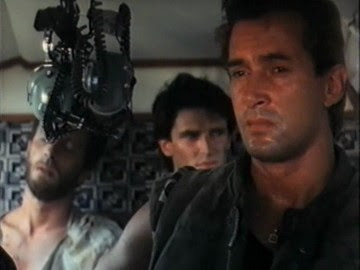 There are many references to First Blood (1982) and the Rambo films of the time (Soleri even says, apropos of nothing, to a baddie "I'm your worst nightmare", even though the baddie in question didn't ask him anything or say anything) as well as the A-team. There is a musical theme that plays a few times that is very reminiscent of the A-teams' classic da-da-d-da, duh duh DUH! The team Straker is in charge of also recalls that classic show.

Speaking of other movies and shows, the main Vietnam baddie plays chess. Just like in Eye of the Eagle III (1989)! What are the odds?!?!? Norton has a classic one liner relating to this as well. Crossfire also recalls the classic NES game "Jackal". The good guys ride around in a jeep and rescue the hostages. Long live the 80's!

The most obvious flaw in Crossfire is that it is overlong. The movie begins to repeat itself after awhile with endless scenes of shooting. If it had been trimmed in the editing room, it might be closer to classic status. But it does have an interesting and unorthodox ending, which was welcome. Watch out for more Richard Norton vehicles (not just his tanks and jeeps) in the future!

Comeuppance review by: Brett and Ty
Posted by Ty at 7.7.10

Proud to still have this on VHS all these years later! The negative ending is great. The lads were used as human toys once again ...

Same here! We really enjoyed the different ending and Norton's performance. That is cool you still have the VHS!

Great review! I have the Dutch DVD. I wonder whatever happened to Anthony Maharaj? His movies were always awesome. Maharaj could have been the next Cirio.

Totally agree, Maharaj should have made more movies. All the ones he made with Richard Norton were solid.