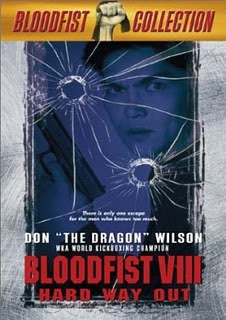 AKA: Bloodfist VIII: Trained to Kill

"I will always be employable, and you'll always be dead!"
-McGrath (Evil Baddie from movie)


Mild-mannered high school math teacher Rick Cowan (The Dragon) goes through his days teaching his pupils algebra and trying to relate to his 15 year old son, Chris, who is a student in the school where Rick teaches.

After some Italian baddies gun down a guy in a convenience store and attack Rick at his home, the truth comes out that Rick is actually George MacCready, who worked in the CIA doing covert ops. Now that a hit team is out to kill him and his son, they first go to a safe house which isn't so safe. They then fly to Ireland to get more answers.

Rick has to battle through the cops, the gangsters, find out who is double-crossing him, and save his son who has been kidnapped. Can he succeed?

The Dragon is actually believable as a high school teacher. You gotta love his wooden, but fun delivery of his lines ("The socialists are tracking me down!"). He should have done more martial arts and less gun shooting. We want to see his rockin' moves on the bad guys, not just shoot guns. He does most of his fighting in a winter coat leading to the new term "coat-fighting". 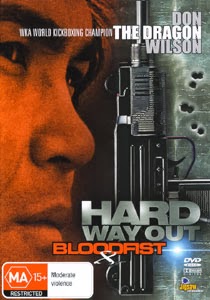 John Patrick White portrays the sassy white kid, Chris. He may ask a lot of questions, but he is pretty handy making an electrified boombox. A movie highlight is when the school bully touches Chris's radio and gets the shock of his life, as shown by the highly realistic blue lightning over his body.

As this is a Roger Corman production and he likes to pinch pennies, he probably connected the shooting of this movie and his other Ireland production My Brother's War (1997). He wouldn't waste a trip to Ireland. Would he?

Character names are movie references themselves. There's Michael Powell, Emeric Pressburger, Gianini (the main baddie who was "born in Corleone"),and even Michaelangelo. Film fans will notice these references.

This is an enjoyable Dragon entry. The locations are different from the usual fare, the action sequences are lively, and The Dragon rarely fails to deliver what you want.