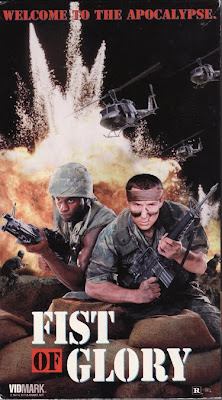 "Welcome To The Apocalypse."

In this period piece set towards the end of the Vietnam war, Jake "Johnny" Reynolds (Cook) and his team are deep in the jungle fighting the VC in an unauthorized mission. During some generic Vietnam action that lasts over thirty minutes but somehow manages to completely sidestep anything resembling character development, there are constant firefights and explosions. Grass and dirt continually blow up, and it makes Eye Of the Eagle III (1989), Crossfire (1988) and Firehawk (1993) seem like episodes of Masterpiece Theatre. It gets quite brain-numbing.

Three months later, while on some temporary R&R, Jake decides to hit the town in Vietnam. He realizes his buddy "Mad Dog" Lee has been brainwashed, hooked on heroin and forced to fight in underground punchfighting matches, dubbed "Saigon's Awesome Arena of Blood". There are no rules and you must fight to the death. Concerned for his friend, Jake infiltrates the operation. He even hires a foreign trainer to help him. After nursing Lee back to health, they set out for revenge against the entire town.

In Apollo's first-ever movie role, he's as wooden and surly as ever. He has a funny haircut, and, like American Kickboxer 2 (1993), wears a pink shirt. Maybe it's in his contract.

The film boasts some decent stunts, and when the VC are shot they are a bit "flippier" than usual. They spin around a few extra times in this one. One soldier is even blown up and flies through the air in a sitting position. Just imagine Magik's immortal "sit-down dance" from Body Rock. (1984) Sure, there are constant blow-ups, but for what? Fist of Glory could have used a bit more character development and a few less unnecessary explosions. The punchfighting is a bit weak compared to some of the others in the meathead genre. However, in one match, the man Jake is fighting has "secret chilis". He has some hot peppers in a corner of the ring, and when Jake isn't looking, he eats them and then spits in his face. That was pretty novel.

In one of the battle scenes, only for a few seconds, we see a POV of Lee's machine gun. It seems it is attached to the camera. It is like a first-person shooter, which was very different in 1991. It also doesn't wear out its welcome. We enjoyed that.

Fist of Glory (whatever that means, the title doesn't make much sense) is fairly interesting because it is a hybrid Vietnam/Punchfighter, and because it is the first appearance of Dale "Apollo" Cook.