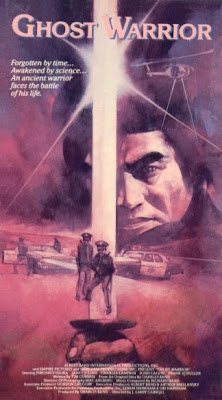 "Action thrills from the makers of Troll!"

Yoshimitsu (Fujioka) is a Samurai in 1500's Japan. A duel goes awry and he falls into a frozen lake. When some skiers discover his frozen body in the 1980s, Yoshi is shipped to L.A., supposedly for an autopsy at the California Institute For Cryptosurgical Research. The building is inexplicably gigantic. Dr. Richards  (Calvin) decides to revive him and it actually works.

Yoshi is helped by Chris Welles (Julian), a scientist who speaks some Japanese. She befriends him, but when a greedy orderly tries to steal Yoshi's swords, the orderly is killed and Yoshi escapes into the go-go 80s.

What will happen to this ancient warrior in the modern world?

Yoshi sees a helpless old man being menaced by a gang of 50 year old punks and, true to his samurai code of honor, decides to intervene. The guns and knives of the AARP punks can't compete with Yoshi's top quality samurai swords.

Fujioka is excellent as Yoshi. He brings much more class than is needed to this Charles Band production. He looks at cars, lamps and TVs like they are new and strange things. He is totally believable doing this. A movie highlight comes when he sees metal band W.A.S.P on a TV and gets scared.

Two humorous bits are when, firstly, the character of Berger (Schuller) is introduced. He is a lazy, cigar-chomping slob and provides some mild chuckles. Secondly, when Yoshi enters a sushi restaurant, a man exclaims: "It's Toshiro Mifune!".

The character of Chris narrates the tale. Is it necessary? Only you can be the judge. One of the more interesting aspects of Ghost Warrior is how Yoshi's old life parallels his new life. The film cuts back and forth between the two.

According to the back of the VHS box on the Vestron Video label, Ghost Warrior is in the "Time warp tradition of Iceman!" We would also add Beastmaster 2: Through the Portal of Time (1991) and Encino Man (1992).

The movie is somber and somewhat mediocre. There's not a lot of action until the end and is worth seeing for the performance of Fujioka and not much else.


Comeuppance Review by Brett and Ty
Posted by Ty at 8.7.10

Are u Sure this is on the Lightning label ? Because I have the USA tape here & It says Vestron video (also the label on top of the tape).

Looks like we made an error in our review, we just fixed it. Thanks for mentioning that to us!