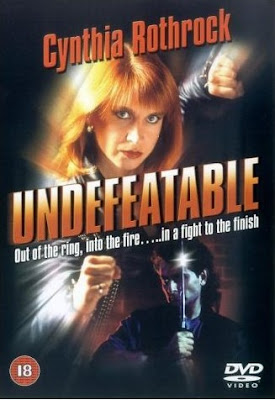 
Paul, AKA "Stingray" is an abusive husband who also fights in "Death Matches". His wife Anna (he calls her "Hannah" a few times), leaves him and he goes insane. Any woman who wears a flower print dress and has black hair becomes one of his victims. He tortures and kills them, and their boyfriends. 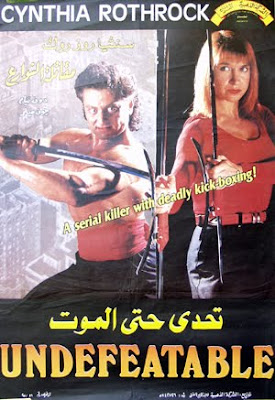 Meanwhile, Kristi Jones (Rothrock) is part of the gang the Red Dragons. She gets paid to fight other gangs. When Paul kills Kristi's sister, Kristi gets mad and is out for revenge. 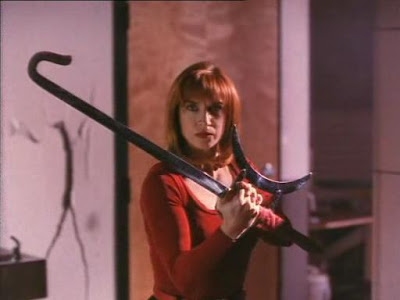 If you know anything about the great Godfrey Ho, you know this is completely insane. Perhaps not as much as, say, Clash of the Ninjas (1986), but hilariously deranged in its own right.

The character of Paul makes a ridiculous baddie. He closely resembles Joey Buttafuoco, and he saves people's eyeballs in his fish tank. He tortures people and kickboxes at the same time. He screams "I will find you!" and spray paints his hair red to look more devilish. He yells fan favorite yell, "Nooooooo!!!!" 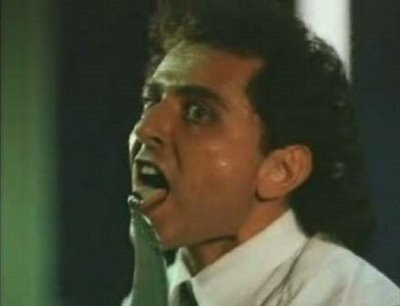 The other villains are incredibly funny. One looks like Eddie Murphy, "Bear" dresses in a football outfit and does somersaults. When Bear (not the same Bear from Maximum Force (1992)) loses his match with Kristi, his girlfriend sighs, "Oh, Bear!"

The last line of the movie is as nonsensical and hilarious as the rest of it. We won't give it away, but suffice it to say, enrollment in college is involved.

Undefeatable is silly fun at its finest. Godfrey Ho can shoot action as well as concoct an absurd storyline. It is filled with so many funny lines, we can't list them all here. This film can be enjoyed by anyone, and if you already like Rothrock it only sweetens the deal.

Comeuppance review by: Ty and Brett
Posted by Ty at 8.7.10

How does this movie have zero comments? The only thing I can think of is that people who watched it are too busy re-watching the movie.

It is so bad it's fantastic!

The Stingray character has to be one of the biggest over-the-top performances ever filmed. I know hyperbole is used endlessly, but I truly mean that.

Don Niam (Stingray) gave a pretty good interview that included some bits on his experiences on this "masterpiece" ...

Haha! Good point. No time to comment...This is a Rothrock masterpiece. Stingray was brilliant.