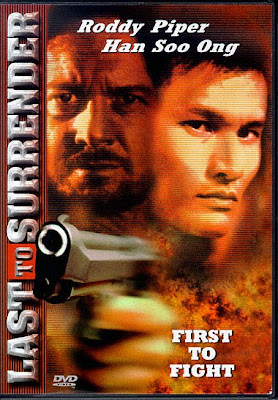 Nick Ford (Piper) is a tough cop on the beat and on the edge. While working the mean streets of Seattle's Chinatown, he fails in his attempt to capture super-evil crime boss Tiger (Andy Yim). Ford is then reluctantly partnered with by-the-book Chinese cop Wu Yin (Ong). In the their tenacious quest to find the deadly Tiger, they fly to Burma and find themselves deeper in the culture and the danger than ever before.

Roddy Piper as Ford is the type of cop who has an attitude but gets results. Piper strongly resembles Motley Crue's Vince Neil in this film. A trend in the movie industry seems to be "Team up Roddy Piper with someone with a different race and see what happens." see: Back In Action (1993), Tough and Deadly (1995), and now Last To Surrender. Sure, he calls Wu "Chinese Takeout", but he charms the audience's pants off with his million dollar smile.

Han Soo Ong as Yin is the opposite of Ford. He is polite, has patience, and sees Ford as a hard-headed stupid Yankee. You like him and want Wu to get along with Ford. A big chunk of the movie is set in the Burmese jungle and Yin and Ford are forced to get along in order to survive.

Last to Surrender has some entertaining humor that makes the movie more palatable. Piper gets some great lines. Some of which include "I hate oil" and "I hate tacos". He also gives a passionate defense for hot dogs. And let's not forget his infamous $92.00 jacket. Once the "Original Odd Couple" get to Burma, they meet Bong-Bong, a comic relief character as indicated by his name.

There is an interesting correlation between 'Surrender and the David Heavener vehicle Massacre (1985). Both deal with an angry white cop in the midst of Seattle's Chinatown. It would make an thought-provoking double feature.

Even though Last To Surrender was released on the cusp of the new millennium, in its spirit it is truly an old-school actioner to keep an eye out for.


Comeuppance Review by Brett and  Ty

Best of all in this film was Piper character as a fairly overt racist. id idn't know if we were supposed to agree with him, be sympathetic, or appalled.