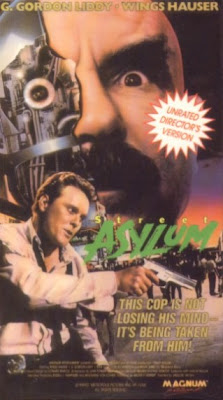 "This Cop Isn't Losing His Mind...It's Being Taken From Him!"

The always cool Wings Hauser portrays Detective Arliss Ryder, a cop on the beat working the seedier side of Hollywood. With crime rampant in the streets, Ryder is tapped by Captain Bill Quinton (Cord) to be a part of a new task force called Strike S.Q.U.A.D. (Scum Quelling Urban Assault Division). Every cop in the SQUAD has a secret microchip in their spine that makes them more aggressive. This causes conflict between Ryder and his wife. Arliss is teamed with the maniacal Joker (Richardson) and his non-stop cackling and downright insanity cause tension between them.

Ryder wants to find the man who shot him and the conspiracy goes all the way to the top. How does it connect to the mayoral candidate Jim Miller (Liddy) and how does Reverend Mony (James) fit into all this?

One of the flaws of the movie is that it needed more Liddy. There is a severe lack of the infamous jailbird and Watergate lawbreaker. He is entertaining as Miller in his first feature film. It is such bizarre casting, we wanted to see more of G. Sy Richardson almost steals the show as Joker. Wings is more of the straight man to these shenanigans. However Wings' character arc is more interesting.

Interestingly, Street Asylum bears a resemblance to Repo Men (2010). Hauser and Richardson parallel Jude Law and Forest Whitaker in that film. Both take place in a futuristic city where technology is implanted in the body. Coincidence? We think not.

Street Asylum shares the aspects of other Gregory Dark work, in the fact that it is grimy and bleak. Let's not forget Dark's recent triumph, the Kane vehicle See No Evil (2006).

To learn about Wings Hauser and his long career, please visit our friend The Direct To Video Connoisseur for an informative and entertaining time!

Ty & Brett, thank you for the coverage of Street Asylum and your mission at Comeuppance. As the writer of SA, I can give you some background. We were only able to afford G. Gordon Liddy for a couple of days, hence the limited screen time. Thanks for the "tip o'the hat" to both Wings Hauser and Sy Richardson. They, along with Brion James and Alex Cord, and the entire cast really brought their characters to life.

Try looking at this movie (even the trailer on YouTube) in light of Trump's current campaign rhetoric. "History doesn't repeat itself, but it rhymes."

You're welcome! Happy to help. Thanks so much for your input. Very interesting about G. Gordon Liddy, he must've been fun to watch act. Any other stories from the making of SA?