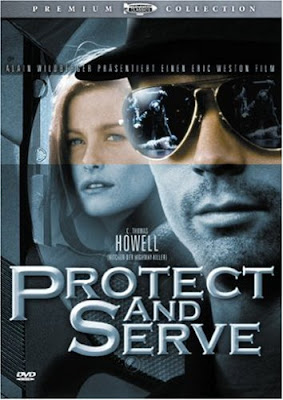 
Howell plays Detective Philip Egan, a loose-cannon Detroit Cop On The Edge. He witnesses his fellow police officers beating up an unarmed suspect. They "read him his rights" while they beat him to death. Also these corrupt cops take kickbacks and paybacks. Egan tries to quietly sign up with "the rat squad", AKA Internal Affairs, so he can get justice for the slain man but without his vicious cop buddies knowing. Also there is a serial killer on the loose picking off police officers. AND he is teamed with a new female partner, McCallister, who he doesn't get along with. It looks like Egan has a lot on his plate.

The cops have some funny "street" dialogue such as "you're coming up short, homie" and "hang around, ese" Like "Law and Order" this was ripped from the headlines of the time. In this case, the contemporary story of the Rodney King assault. Thankfully, "To Protect and Serve" is gritty and that serves the film well.

C. Thomas Howell puts in a tough performance and you care about his character and you want him to succeed. He's a man with a conscience that has nightmares about the beating. He also wears a sweet brown jacket and cool baseball cap throughout the movie. His chief at the precinct tells him "you're a loose cannon, Egan! You're not RoboCop! I'm tired of cleaning up your messes!" Classic stuff. For more prime Howell, check out The Sweeper (1996). 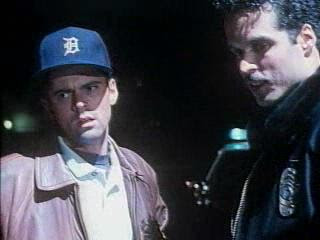 Sure, To Protect and Serve has some cliches, but it's the ones you want. It's a cop drama that delivers the paint by numbers action, such as the cops yelling at each other and pulling each other's shirts, but with a C. Thomas Howell twist. If you come across this tape, pick it up if you like Howell or cop dramas.