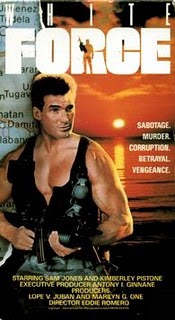 Johnny Quinn (Jones) is a guy with a cool bomber jacket who is in North Thailand to get some answers. People think he killed his former partner, Tom Irving (Metcalfe). He is innocent, and meanwhile the evil Alex Korda (Hughes), a businessman intent on making big profits off the sale of narcotics, wants Quinn out of the way. After a location change to Manila, the authorities and Korda's men are after him. So Quinn teams up with Tom's daughter and the token wacky computer nerd named Wizard (Fabregas) to save the day. Apparently all the valuable information is on a tiny "laserdisc" which looks like a little cymbal. Will Quinn and his 2-person team prevail?

Honestly, Whiteforce is pretty standard fare. Sam Jones has been in better movies, such as Maximum Force (1992). His unshaven charm provides help to this ailing actioner. He keeps weapons in the heel of his boot and would sooner shoot someone than give up his classic jacket.

The idea of "corporate narcotics" is interesting, but it's all kind of muddled with things like the "International Security Alliance" and "Ambrack International". The viewer's interest begins to wane, and a bunch of shooting doesn't really help that much. Neither does the goofy music.

Unfortunately, Whiteforce resembles Down Twisted (1987). The team up of Jones and the girl in a foreign land, on the run, has a similar ambiance.

Vic Diaz turns up as one of the baddies, and "Indiana" Sam Jones is invented because of the popularity of that Spielberg classic. It even mentions it on the back of the VHS box. Speaking of which, you don't have to look too closely to see Sam Jones' head pasted on someone else's body. This happened to Jones again with Driving Force (1989). It's pretty funny that companies like his head, but not his body. Hopefully that didn't give him a complex of some sort.

In all, Whiteforce is paint-by-numbers and somewhat tedious going, buoyed to a certain extent by the lovable Jones.