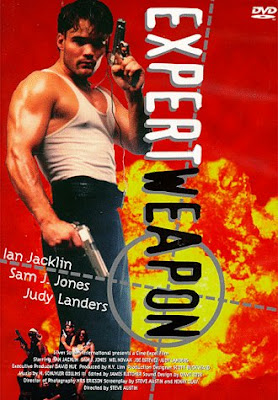 Expert Weapon, or "Ew" for short, concerns Adam Collins (Jacklin), a small-time criminal with a big attitude problem who kills a police officer and is sent to the gas chamber to die for his crime. Before he kicks the bucket, he is recruited by Janson (Jones) to be a covert assassin. According to Janson, he has "killer instincts that run deep". Collins must train to be an assassin from the ground up. He learns all the tricks of the trade, including how to read and write (Collins is illiterate). He also learns martial arts, and, most importantly he goes to drama school. The "drama school" segment of the film takes up a huge chunk of the running time. After Janson sends Collins on some missions with some chintzy effects, he falls in love with the drama teacher Lynn (Judy Landers). He is eventually marked for death by his own covert team. Will he escape with his life, love and newfound acting skills intact?

Expert Weapon has cheap production values and sound effects. Jacklin looks like a cross between Stephen Dorff and Casper Van Dien, and in the acting department, he makes Matt McColm look like Laurence Olivier. In a career of direct-to-video releases, fan-favorite Sam Jones is slumming with this one. Joe Estevez stops by as a weapons expert, and puts in a bugged-out performance. He has a high energy level here, and the movie sags without him. When your movie NEEDS MORE JOE ESTEVEZ, you have a problem.

On one of Collins' missions with his crew, before there is an explosion, Collins warns "Let's not make this another World Trade Center, alright?" That was topical then, and very prophetic. Jones calls this explosion a "Chinese fire drill".

During the huge "improv" section of the movie, Collins must work with a crew of aspiring actors. There's Burton, Robinson and Kane. Burton looks like a Black Erik Estrada. Art imitates life when Collins says to his teacher: "I'm no actor", "I don't read no lines!" and the Maury Povich classic "You don't know me!" Collins/Jacklin literally has to learn to act right before our eyes. When an improv session with the mustachioed Robinson goes sour and Collins leaves the class in a huff, Collins is then tortured by being strapped to a gurney and having a rat placed on him. Collins says, in a very funny and wooden manner "aaaah, get this rat off me, aaaah". Next time don't call your dad a "rummy".

We want to see action, not acting class. The movie, like the chase scenes, goes around in circles.

Disjointed and bargain-basement, you basically wait for Expert Weapon to end. This "Weapon" is a dud. Be an Expert and avoid this one today.

No wonder it's difficult to find, it's apparently really bland. If it's on YouTube, I'll give it a look but otherwise I shall take your word for it. Been on a Joe Estevez marathon as of late.

This could've been a winner, but it's very slow and very dumb. Soultaker is a better Joe Estevez movie. Haha.