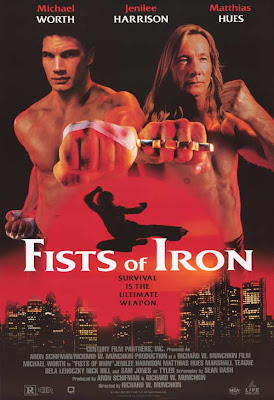 
Dale Hartwell (Worth) is an easygoing mechanic and single father with some impressive fighting skills. One day his friend Matt (Nick Hill) takes him to a ritzy mansion where "Peter Gallagher's All-Stars" (not related to the awesomely-eyebrowed actor\singer), fight in a backyard ring for big money cash prizes. Matt foolishly thinks he can go two minutes in the ring with hulking super-brute Victor "The Destroyer" Bragg (the always charming Hues). Bragg has the most arrogant name since Trevor Gottitall from American Shaolin: King of the Kickboxers II (1991). If you're the Victor, ya gotta Bragg.

Sadly, Matt dies of internal injuries and a heartbroken Dale vows retribution. So like C.J Thunderbird in Fist Fighter (1989) wanted a piece of "Rhino" (Hues), Dale wants a piece of Bragg (Hues).

Thankfully, Dale hangs out at the local watering hole, also frequented by Daniel & Tyler (Lee and Jones respectively), two former fighters with a history with Gallagher. They train Dale to take on the reigning champ in a series of montages. To get revenge for Matt, Dale must go up the ranks. (Dale fights the usual "Boxcar Joes", "Barts", and "Butchys" and the like at the CAR-U-RENT trucking stop). Add to this a ridiculous love triangle and the end result is pure Iron Gold. 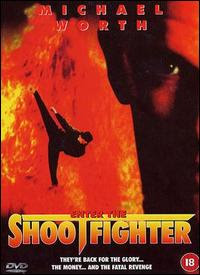 There is a lot to love about Fists Of Iron: It has a lot more heart and character development than your average punchfighter. The main protagonists Worth, Jones and Lee are all likable and you care about their mission. Jones and Lee make a great comic team and there is a lot of humor in the film as a whole. (i.e. the subplot about a meathead refusing to pay for his fixed motor). Hues plays the evil villain with aplomb. (mid-film they change his name to Victor "The Giant" Bragg). Jones looks like Chuck Norris with his beard and wisdom. Every male in the movie except for Eric Lee has a square head. Where was Howie Long when you needed him?

Taking a cue from Shootfighter II (1995), Gallagher's fighters have their own pants. They are blue with white polka dots. The ring announcer screams (with no microphone) "Let's get ready to rumble!" Michael Buffer charges five million dollars to say this. This is copyright infringement and the filmmakers might be hearing from Buffer's lawyers soon. As for the softer sides of the movie, Worth looks way too young to have a daughter that looks about 12 years old herself. He looks 16 at best. As for the love interest, she is not very attractive and it's not believable that she would be the focal point of a love triangle between Dale and Gallagher. They should have gotten Shannon Tweed, Shannon Whirry, Joan Severance, Angie Everhart, or someone of that ilk to play the part.

In the one of the montages, Dale has to pick up a boulder from one of the many boulders in Tyler and Daniel's front yard. Then it's "Meathead in the stone" as Dale tries to be the chosen one. It is like The Karate Kid (1984), but interestingly, there are two Mr. Miyagis training him.

Richard W. Muchkin knows how to make a quality punchfighter. Just see Ring Of Fire (1991) for more evidence of his talent.

A cut above the average meathead flick, we recommend "Fists Of Iron".