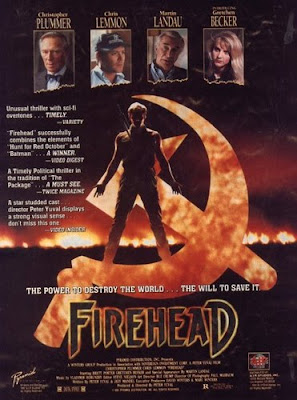 
"The Power to Destroy the World...And the Will to Save It!"

Just when you thought AIP had run out of insane ideas...they really outdo themselves with Firehead, the story of an Estonian superdude who can shoot lasers out of his eyes and is pals with Chris Lemmon. We're not kidding.

At the height of the cold war, Ivan Tigor (Porter) leaves his communist homeland and escapes to America. He is going around blowing up military installations, so energetic but dopey research scientist Warren Hart(Lemmon) teams up with beautiful military officer and scientist Buchanan (Becker) to find the truth. This upsets Colonel Garland Vaughn (Plummer) who is a member of a secret, underground cult called the Upper Order who meet in secret and are planning World War III. Meanwhile, The President (Ed Kearney) and Secretary Fallbright (George Elliot) are all involved.

Did we mention Tigor can shoot lasers out of his eyes and the origin of this is not really explained? So now Tigor and Hart are on the run with only Tigor's lasers and sometimes forcefields to help them.

This odd and zany AIP entry has some wacky humor thanks to Chris Lemmon. He's always yelling "Jesus Christ!" Most of his lines in the film either start or end with him exhorting the name of some people's Lord and Savior. His 12 year old daughter in the film, inexplicably named Smith (Levy), is a plucky genius who drives a car and seems to have some fun saying wordy, scientific dialogue. She has an ALF doll in her room. She practically steals the film, in much the same way Sarah Dampf did for Stealth Fighter (1999). Too bad the two tweens never starred together in a movie. They could team up and fight crime or something. Her energetic, loquacious performance contrasts completely with Brett Porter's monosyllabic, monotonous Arnold Schwarzenegger/Dolph Lundgren/Matthias Hues-style delivery. The film does borrow somewhat from Red Heat (1988). I guess we were running low on English-as-a-second-language action stars. Thank you Brett Porter. 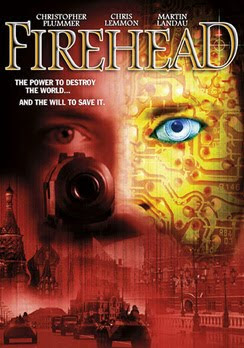 Martin Landau puts in a "special appearance" as Pendleton. He mutters some exposition and looks bewildered. He seems to be thinking "What am I doing in Firehead?" Same thing goes for Christopher Plummer (who has either won or been nominated for every award under the sun) - a usually respectable actor who decided if he was gonna slum, he was really gonna SLUM. You kind of feel bad/embarrassed for him. But maybe he had fun. We don't know. Someone ask him and get back to us.

Chris Lemmon looks like a cross between Joe Piscopo and Wings Hauser in this film. He seems to care a bit too much about every little thing that happens. Gretchen Becker is on hand as the eye candy but she's much more than that - she sings the powerful end credits theme song as well.

There is a lot of mumbo-jumbo in the film, such as some gobbledygook about the "special operations computer bank" (which has its own jaunty theme music), and our heroes and government agents trapped in a building before a deadly virus is released. Yet they never take any time to explain Ivan's superpowers.

Think of this movie as AIP's attempt at being topical. It is incredibly silly and Ivan's laser eyes are the main draw. But we think they held back on using the effect too much to save money.

"Fire" up the VCR for this classic tonight!

This looks amazing. The trailer was fantastic. "Coming soon to a theatre near you"? Seriously, this went to cinema? I have to get this.

The movie is hilarious! definitely check it out!