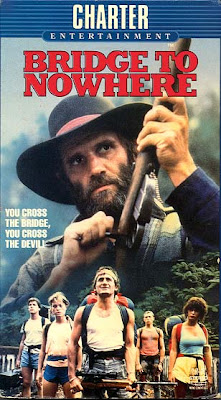 When a group of teenagers (Gray, Carl, Julie, Tanya and Leon) from the city go deep in the woods to go camping and see the "Bridge To Nowhere", they run afoul of a bearded, vicious old salt named Mac (Lawrence) who chases them through the woods and hunts them down one by one. Leon loses his mind and goes missing. They played their boombox a bit too loud, apparently.

Sadly, Mac never yells "Get off my land!" (while brandishing the prerequisite shotgun), but one of the teens does say "Where's the Bridge To Nowhere?"

Bridge To Nowhere is well-made and a better-than-average clone of Deliverance (1972), Rituals (1977), Southern Comfort (1981), and Just Before Dawn (1981), but it bears the strongest resemblance to Damned River (1989). I guess you could call this a wilderness survival movie, New Zealand style.

It starts off with some typically-80's sex romp style antics but then it turns deadly. It has a nice new wave contemporary soundtrack to fuel the fun. The highlight there is Marginal Era's "You Fascinate". The kids bring their beloved boombox everywhere, even deep in the woods where they dance their way through a hiking trip (forest dancing) and even on the Bridge To Nowhere (Bridge dancing). They even break out the sleeping bags and sleep on the Bridge itself. If all they wanted to do was dance, couldn't they do that at home?

"And Matthew Hunter as Carl" is its own credit, dedicated to the kid who goes camping in patchy jeans and Doc Martens. Interestingly, future famous director Lee Tamahori was a first assistant director on the film.

Positives: The picturesque New Zealand scenery is captured well by the cinematographer, the acting is above-average, and it is lean and mean at 85 minutes.

Released on the Charter label on VHS in the U.S., if you are looking for a wilderness survival film you may have missed, Cross the Bridge To Nowhere tonight!