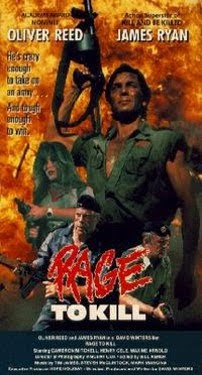 Evil General Edward Turner (Reed) and his army of thugs show up on the Caribbean island of St. Heron and stage a coup. They take over the island by force and set up shop in the local college, and the students there are held hostage. When war hero/race car driving man Blaine Striker (this is like the tenth movie we've reviewed where the hero is named Striker) (Ryan) hears about this, he snaps into action because his brother is on the island. He then leads the students in a revolution against the General and his men. With the help of plucky newspaper reporter Jennifer Baker(Maxine John) and the local, indigenous warriors led by Wally Arn (Henry Cele) and special agent Sgt. Miller (Mitchell), will this ragtag group of counter-revolutionaries save the island from tyranny?

When Oliver Reed shows up in a helicopter and starts opening fire on everyone and one of the first lines is a very convincingly-said "eat dirt you scumsucker", you know you are in for an awesome cinematic experience. It's not entirely clear exactly WHY Turner chooses to take over St. Heron, but we do know he's making missiles for the Russians. This film is topical and tropical as it recalls 80's concerns like the cold war and the Grenada incident. Of course, because this is a film dealing with the issues of the 80's, there are gratuitous scenes of aerobics.

Not to fear because "The President" is on the case. All he wants to do is "watch the world series" and he has a lot of funny advisers. They sit in a room which isn't very presidential and discuss things like "backdoor diplomacy". It has some pictures of past Presidents though. Kind of like how the "American Med students" we keep hearing about have an American flag in their dorm so you know they are American, despite the fact that some of them have accents from other parts of the world. The set decoration tells the story, I guess.

We wished there was more Oliver Reed, who probably figured that he could go nuts in this AIP production because...this is an AIP production. There is plenty of Cam Mitchell, which is a good thing. The guy that plays Striker's brother looks like a cross between fan favorites Mike Norris and Richard Norton. This is as close as we'll get to seeing them in a movie together. Interestingly, he even says the line, after beating up some baddies "Not bad, I learned that from a Chuck Norris movie". Usually, they mention Rambo in these movies. 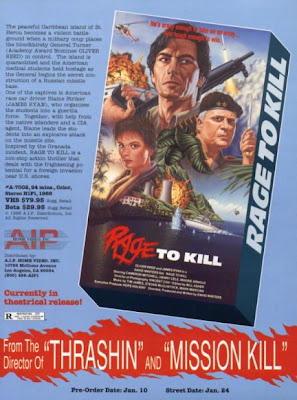 While the idea of James Ryan leading a student force of kids who aren't used to carrying guns seems like a good idea, somehow the silly fight scenes, ridiculous, unnecessary torture scenes, mindless, shirtless shooting and cardboard nukes add to the downmarket feel.

A note about the music: the end credits feature an amazing ballad, "Do You Remember Love?", which is extremely catchy. Sure, it has little-to-nothing to do with the hijinx we just saw, but its power will be stuck in your head for days. The scenes in the native village include the upbeat reggae tune "Party Party Party" over and over and over again. That's a catchy one too. The beat is so infectious, we even see the infamous "Cam dance", i.e., Cameron Mitchell dancing.

Bearing a weird resemblance to recent superfilm The Expendables (2010), Rage to Kill is what you would expect of an AIP treatment of this type of material. A fun "beer" film, invite over some friends and Rage it up tonight!

I've been emaning to get into some more AIP movies, especially after how awesome Deadly Prey was. This is a pretty good candidate for my next one.

Awesome! I look forward to your AIP reviews!

This movie is pure gold. It doesn't take itself seriously and pours on the comedy. David Winters also made two very similar movies, Mission Kill (1986) and Code Name Vengeance (1987), both starring Robert Ginty.

We want to see those Ginty movies eventually. They are tough to get. Happy you liked Rage To Kill too.