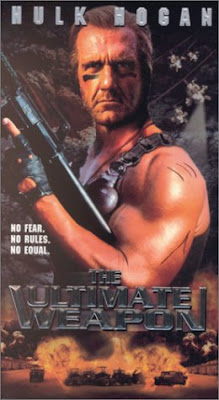 
Fresh off his role in Santa With Muscles (1996), perhaps the Hulkster yearned for more adult fare so he attempted to be in an R-rated action film. This seems like a good idea on paper but this jaunt barely rises to the level of adequate entertainment.


Hogan plays Ben "Hardball" Cutter, an "independent contractor", i.e., a mercenary. When his old commander, Top (Vrana) assigns him with a new partner, Vince "Cobra" Dean (Marotte) the two don't really get along, but they must stop the IRA gunrunners, led by the evil Dylan McBride (Pilon). Apparently they are involved in "Operation Shamrock", a classified U.N. operation.

When Cutter blows up most of McBride's stash of weaponry, McBride then declares war on the Hulkster, I mean Cutter. Meanwhile he is trying to reconnect with his estranged daughter Mary Kate (Preston) who is now working in a sleazy strip club. Will the Cutters ever be a family again? Will McBride ever cut his ponytail? ... WHY?


Every time Hogan walks on screen, you laugh because of his hair, his mustache, and his overall demeanor, but mainly because all the clothes he wears in the film are at least two sizes too small. It's hard not to notice his ill-fitting clothing. Maybe he was still going through puberty at the time. Plus he seems confused and dumbfounded most of the movie, emphasis on the "dumb".

He seems like he is trying to grasp something but not quite managing. He should stick to comedies and wrestling, his obvious strong points. His partner "Cobra" is not at all tough and besmirches the name of that great film and TV show. Plus he resembles Gary "Baba Booey" Dell'Abate from the Howard Stern Show. The main bad guy looks like Alan Thicke, once again besmirching one of the greatest Canadians (but I suppose that is inevitable as the film was shot in Montreal, Quebec, Canada. Preston's "aboots" give away the game as well).


Also, when "Cobra" is fighting the baddies, he is wearing a bright yellow shirt and has a belt buckle almost as big as his head. If he is trying to be stealth, looking like a neon banana in pajamas is not gonna help.

In this low-budget, brain-numbing exercise in stupidity which is disturbingly similar to the aforementioned Radical Jack, there are too many training sequences and other unnecessary bits that make the 90 minute running time seem much longer.

There is some pseudo-cool "quick cutting" at times, and the barfights and drive-by shootings are so idiotic and ridiculous it's unfathomable. The "Simon says" sequence truly plumbs the depths of dumb. Plus there's the prerequisite sequence where the hero is tortured, but in this case it's the Hulkster in various stages of his shirt coming off. 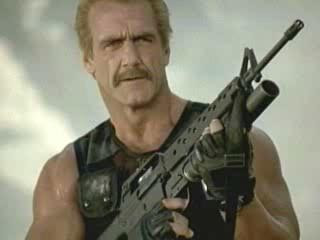 The second half of the film is basically a shirtless Hogan running around (literally - 78 minutes into the film there is a painfully obvious stunt double for Hogan doing a very simple jump over a low fence). Somehow he finds the time to change his pants and find a funny vest, but his chest remains exposed, and his "cuts" come and go. None of this should come off as complaining. You should know going in that The Ultimate Weapon is not Masterpiece Theatre.

Once again, Avalanche has a "misstatement" on their box, as they did with Counter Measures (1999). The running time was a grueling 90 minutes. The box says 110. Luckily, it is not that crushing. It probably scared off potential renters 13 years ago. We don't want to spend that much time with Cutter, Cobra and Top. Luckily, we don't have to. Plus there are other "Hulk" references on the box. There are references to No Holds Barred (1989) and Suburban Commando (1991). Speaking of Commando (1985), Hulk even says in the movie "I lied", exactly mimicking Arnie's immortal line.


If it's brainless entertainment you seek, The Ultimate Weapon will fill the bill perfectly.