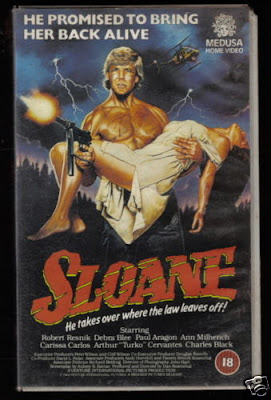 
"He Takes Over Where The Law Leaves Off!"

Philip Sloane (Resnick) is a Tae Kwon Do instructor in L.A. who lives on a houseboat named the Dragonfly. His former girlfriend, named Janice, has been living in Manila with her new boyfriend, Richard. It seems Richard tried to rip off the main gang boss in Manila, Chan Se (Gamboa) by stealing some of his drug money. So the gang kidnaps Janice. Janice's father hires Sloane to go to Manila to save her because he used to live there for 17 years. Once there, he teams up with Richard's concerned sister Cynthia (Blee). They bicker and fight incessantly but eventually forge a relationship. They're the original "Odd Couple"! Or something like that. They team up with Sloane's friend Pete (Raul Aragon) and his contact on the local police force, Sal (Vic Ordonez) to take down the crime syndicate and rescue Janice. Can they do it?

The main problem with Sloane is that he is such a major jerk! It is quite perplexing why the filmmakers thought the audience would root for a man who is such a shrill, smug, arrogant, conceited, misogynistic, unlikable preppy A-hole. It's never explained why Sloane is such a jerk. He informs his actions - every thing he does - with jerkiness. Imagine if Trevor Gottitall from American Shaolin: King Of The Kickboxers II (1991) was the HERO of a film. All Sloane does is punch the baddies with no flair or skill. Sadly, nothing Sloane does in the movie is cool. When the main villain is more likable than your supposed 'hero', you've got a big problem on your hands. I'd love to know what the behind the scenes team was thinking with this character decision on Sloane's part.

Apparently the filmmakers also believed the name "Sloane" was the coolest, most awesomely original name ever, because besides naming the film simply "Sloane" (thus drawing all undue attention to this awful, awful man), the other characters say the name "Sloane" about a million times, and there's even a completely gratuitous scene in a bar where two hookers ask what his name is. Then nothing else connected to that happens. The scene was there solely to say "Sloane" a few more times.

Someone throws a cobra into Sloane's jeep. Sloane shoots a bunch of people, possibly some innocents, with a machine gun. He goes in a cave and fights, according to the back of the box, "crazed pygmy cannibals". In between each scene is some super-smooth jazz that sounds like a TV soundtrack, possibly Hill Street Blues. It seems Sloane and Fortune Dane's (1986) soundtracks are in a war for the ultimate in smoothness.

There's no excuse for the fact that the film is a brutal 95 minutes. Besides some pacing problems that slow things down unnecessarily, Sloane is in almost every scene. That's 95 minutes with SLOANE! That's way too much time with Sloane. By far the best thing about this film is the box art. Save yourself 90 minutes by staring at the box art above for five minutes. It would be preferable to sitting through all of Sloane.

Released on VHS by Vestron Video in the U.S., do you dare to watch the man you love to hate?