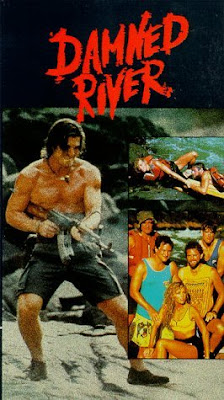 “Ain’t no way of winnin’ when you’re playin’ with the devil’s odds.”


A bunch of stupid, unlikable party dudes go to the Zambizi River in Africa for no reason. If they wanted to “par-tee down” there are a lot of better places to do so.

Their tour guide down the Damned River is Ray (Shellen), a Treat Williams doppelganger who is running away from his past by living and toting tourists around on his raft. His accent comes and goes, as he is southern in every other scene in the movie.

This particular group of tourists includes a poetry-spouting nerd and a hippie who ends every sentence with the word “man” in true Tommy Chong style. The most unlikable character of all (and that’s saying something) is  Jerry (Bancroft), a big fat party animal who isn’t fat and who whines about the lack of MTV in rural Africa. Jerry also demands his “Chow-ski” when he is hungry (because he is “fat”) and the audience is rooting for his demise from the get-go.

Normally these characters would be seen in a 80’s romp. Think Up The Creek (1984) meets Deliverance (1972). “Damned River” is in the tradition of other survival-river movies such as the aforementioned Deliverance, Rituals (1977), Hunter's Blood (1986), The River Wild (1994), and Survival Quest (1989). Damned River is the bottom of the barrel of this bunch. If you have seen every other river flick, and are hankering for more river madness, check this out, otherwise, steer clear.

Ray tangles with a great white hunter type named Von Hoenigen (Van Niekirk) and it ends with fan favorite death, decapitation. It livens up the proceedings. Also on hand is Mavuso, a kindly local. Ray gets crazier and crazier as the movie progresses, eventually reaching Dagget-from-Twice Under-like proportions. Shellen overacts in much the same vein.

Bradford Bancroft is actually effective as the annoying Jerry because he achieved his aim of getting the audience to hate him. Bancroft can also be seen in A Time To Die (1991) and Dangerously Close (1986).

The movie is very dumb as it is but it pretentiously tries to not be, “casually” throwing in high-minded references to such authors as Zola and Byron. Sadly, this wasn’t enough to set it apart from the pack.