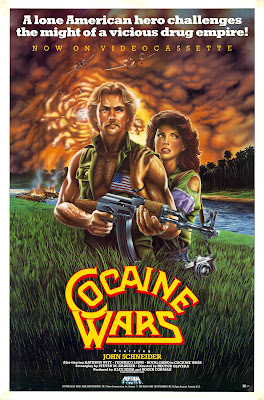 
"A Lone American Hero Challenges The Might Of A Vicious Drug Empire!"

Cliff Adams (Schneider) is an American in South America. He works for drug super-kingpin Reyes (Luppi) and his partner General Lujan (Rodolfo Ranni) as their personal pilot and assistant. However, Cliff is a DEA agent working hard, undercover, to bust Reyes' organization. When Marcelo Villalba  (John Vitali), a revolutionary, "power to the people"-type politician starts gaining some political momentum, Reyes gets worried, because Villalba is anti-drug. Reyes asks Cliff to kill Villalba. This unleashes a chain of events that sweeps up Cliff and his love interest/reporter Janet (Witt) in the violence. Will Cliff be able to protect Janet, Villalba, and their friend Bailey (Dano) from the thugs of Reyes? Will Reyes succeed in his nefarious drug-running plans? And who are those strange German characters?

Cocaine Wars somehow manages to be pretty silly, yet unmemorable. Odds are, you will forget this movie very shortly after watching it. Maybe it's the unclear, disjointed way the plot rolls out, or some of the stilted dialogue and wacky dubbing (things that normally make these types of movies worth watching), but there it is. The unshaven John Schneider, who, here at least, is best described as "flatly charismatic", does a competent job as Cliff. His hirsute status gives him a doglike appearance, perhaps a golden retriever. I mean this in the best possible way, of course. Luckily, his mustache saves the movie. 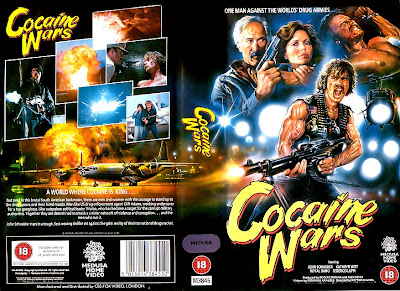 There are the standard car chases and shooting-based action scenes, and the movie would definitely have been remiss in denying Schneider the all-important torture scene. There are some parallels to the Peter Fonda movie Fatal Mission (1990), as well as The Dogs of War (1980) and The Expendables (2010). The main music cue is very similar to the opening notes of Beverly Hills 90210. You think Schneider, after running people off cliffs and such, will at any moment walk into the Peach Pit.

Cocaine Wars is a very 80's subject, and this Roger Corman production, released on the great Media label, perhaps could have been executed better. But at 82 minutes, you can't really go wrong.

Comeuppance Review by Brett and Ty
Posted by Ty at 6.10.10

I have 3 words for this movie: Asswipe Turkey Harmonico.

That is appreciated, but aren't you thinking of Sweet Revenge?

The movie may only be two stars, but that poster is worth five!

Either way, no one remembers what that even referred to.

isn't cocaine wars "in the streets of Saigon, when my ass was king!"?

Haha, great song. I think that was Missing In Action 2 or 3.