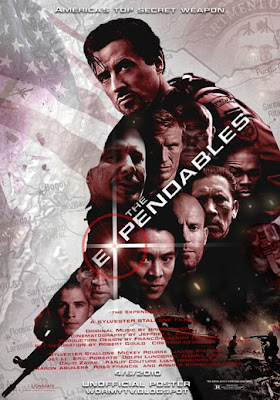 
The Expendables is the most macho movie ever made. From the metallic-looking credits on down, the screen pretty much oozes testosterone.

Barney Ross, Lee Christmas, Yin Yang, Toll Road, Hale Caesar, and Gunner Jensen (Stallone, Statham, Li, Couture, Crews, and Lundgren respectively) are an underground A-Team of sorts who go all over the world doing the hard jobs that no other teams of mercenaries will do. When it is discovered that evil South American dictator General Garza (Zayas) is a puppet for rogue CIA agent James Munroe (Roberts), the team are sent in to clean up the mess (i.e. create a bigger mess by creating countless deaths and explosions) by a mysterious man named Mr. Church (Willis).

When Barney falls in love with the dictator's daughter Sandra (Giselle Itié) and she is kidnapped by the Munroe's goons The Brit (Daniels) and the very imposing Dan Paine (Austin)... get ready to party like it's 1986 as The Expendables hearkens back to the glory days of action cinema. Even Stallone's vehicles (car and plane) are reminiscent of the classic Cobra (1986), as are Garza's soldiers.

Roberts plays the slimy Munroe with aplomb. He gets the classic final villain speech we all want to hear. Let's not forget our favorite governor Arnold: He is basically the comic relief with his jokey cameo and prerequisite funny name (Trench). It would have been fun to see Willis character to return one more time to angrily bellow "This wasn't part of the deal!" or some line like that but sadly, that is not to be.

We're so used to seeing these faces on the small screen, it was a real treat to see them in the theater. They truly deserve it. Eric Roberts, Dolph Lundgren and Gary Daniels in the same scene? Oh yeah! We also get to see a one-on-one fight between Dolph and Jet Li for the first time ever. And Gary Daniels vs. Jet Li and Statham. In the theater! 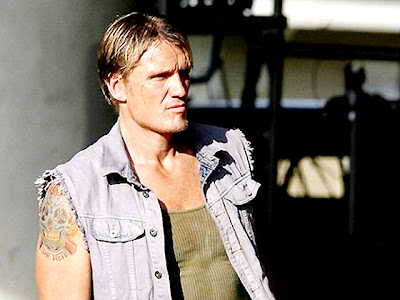 The pairings of all the different fan-favorites is pretty mind-boggling. Of course, with an international cast such as this it becomes hard to understand what some of them are saying - when Stallone and Li talk it's hard to understand, and when Couture talks you don't want to understand. But to counteract his Dale "Apollo" Cook-style delivery, we have Mickey Rourke on hand as the token "good actor" who gets a heartfelt monologue. For a movie with so many characters, it was very well done how each got a nice backstory and it never got confusing at all. 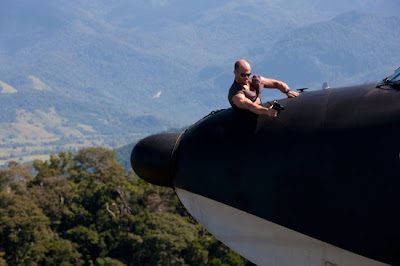 God bless Stallone - he couldn't have delivered this at a better time. What the world needs now is more tough, take-no-prisoners action. Not more sissy junk involving "facebook". This movie is the antidote to "Eat Pray Love". To quote The Simpsons, this is more like "Beat Slay Shove". Another good thing about the movie is it has no stupid kids or teenagers.

When Jason Statham is the YOUNGEST person in the group, we get mature, professional action. Stallone is known for giving his characters funny names and here he really goes to town. You thought Driven's Joe "The Hummer" Tanto was funny...He also includes another of his trademarks - ripped from the headlines topicality. Like the plot of Rambo III (1988) involving Afghanistan, here we have Somali pirates and a clear analogue to crimson-shirted cretin Hugo Chavez. 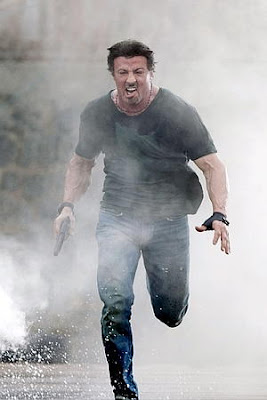 If there is a downside to The Expendables, it is the use of CGI. CGI sucks and it takes away from the old-school feel we love. It's not entirely dependent on it, but when it was there, we felt it was unwelcome.

Back in the golden age, any one of the cast members could have sold a movie. It is a sad comment on movies today that it took a ton of producers and EVERY major action star just to get the project off the ground. How can they top this if they want to do it again?

It has all the clichés we know and love, just on a bigger scale. Abandoned warehouses, neck-snapping the villains, the line "we've got company", exploding guard towers and many, many more. The first 20 lines said by our heroes (and throughout the film) are fun clichés and soundbites. This isn't a complaint. Perhaps a certain appreciation for action movies is needed to truly understand what's going on here. Anyone who trashes this movie simply doesn't get action movies or their significance. They should go back to poking Twi-hards on facebook, or some such moronic twaddle. 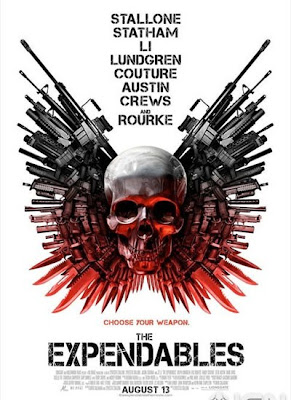 Truly a movie for the fans, The Expendables delivers the goods with a once-in-a-lifetime cast. See it!

My take on it as well!

Such a fun time at the cinema again.