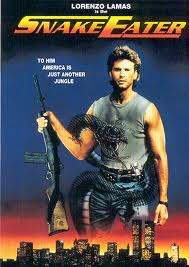 "To him, America is just another jungle."

Jack "Soldier" Kelly (Lamas) is an ex-Marine (part of an elite "Search and Destroy" unit dubbed "Snake Eaters") who now works as an undercover cop in the big city. His unorthodox ways and flippant attitude really annoy all of his co-workers, including the two cops in the car clearly meant for "comic relief" and painfully undisguised exposition. Soldier's also pretty handy at making booby traps. When his family is attacked while on a boating trip by crazed bayou folk, and his sister kidnapped and imprisoned by said folk, Soldier must go into the backwoods to find the truth...and his sister.

He is helped along the way by kindly boat rental manager King (Hawkins) and his daughter, simply known as "The Kid" (Bell). In fact, the evil rednecks live so far up river, King and Kid trick out his beloved chopper and turn it into what can only be described as a "boatercycle". Surviving on his wits alone, will Soldier be able to defeat the entire inbred family before it's too late?

A tagline on another poster for Snake Eater proclaims "As dirty as Dirty Harry (1971). As dangerous as Deliverance (1972)". This seems to sum up the mindset of the filmmakers. Although neither Clint Eastwood or Jon Voight had to deal with "Torchy", aka Ron Palillo.

It is somewhat interesting to watch Lamas go from the city with its spray painted, run-down tenements and homeless people, to the supposedly "tranquil" countryside. Lamas never misses a chance to be shirtless and oiled up, and his snake belt buckle is usually on display. He's so crafty he hides the surveillance wire in his mullet. He has plenty of catch phrases, and nowhere is the goofy humor more on display than in the comical, prerequisite barfight scene. He's at a roadhouse called The Cage, and he must tangle with a biker who wears a necklace made of teeth. Lamas' biker-dude image here must have proven so successful, it was parlayed not just into the Snake Eater sequels, but the TV show Renegade.

While the similarities to Radical Jack (2000) are somewhat disturbing (of all the movies in the world to borrow from, why would the makers of Radical Jack choose Snake Eater?), the bayou folk really are a cross between stupid and menacing. Junior (Scott) is their leader, along with Slim, Jesse, Sissy, Joe, and of course Clyde, who looks like a Doozer from Fraggle Rock. If they ever make a live-action Fraggle remake (it's really only a matter of time, isn't it?) he has a job secured. One of the more disturbing things they do is gag someone with a live fish, which is actually pretty silly. Interestingly enough, Junior attempts to force feed Soldier's imprisoned sister a snake. This dovetails nicely with the film's strange obsession with feeding people live animals, and the title of the movie itself.

Weirdly paced (some scenes are way too long and drawn-out than they need to be) and seeming somewhat like a TV movie at times, Snake Eater is passable entertainment, but probably won't knock your socks off.

Also check out our buddy Simon's review of Snake Eater!

Aaaaaahahaha oh no! This is the review I'm putting up tonight! I think we need to start calling each other to make sure we aren't wearing the same shirts.

I tend to agree too; the premise is there for awesome, but really the redneck plot was... misadvised. I have 2 and 3 to watch still and I'm hopefuly that Snake Eater II: The Drug Buster will be more fun.

What an odd coincidence. If you want i can tell you what we have coming up.

Heard Snake Eater II wasn't bad. Not sure about III though.

There's no harm in us clashing reviews occasionaly - especially if we have different viewpoints, that will make it quite interesting!

I see on your upcoming reviews you have Pentathlon coming up. I managed to secure a widescreen VHS copy of that. The quality is rough but it's the only way to see the movie in its original scope; the DVDs are all fullscreen.

I have the whole trilogy waiting for me to watch it. Will do when I find the time. The title caught my attention when I was playing 'Metal Gear Solid 3: Snake Eater', although the two have almost nothing in comment.

Saw Pentathlon a long time ago, don't remember much. Dolph Lundgren Vs. David Soul. Should be silly fun.

Ventilation Shaft: Definitely look forward to your reviews of the trilogy.

Played Metal Gear Solid 1 on playstation about 7 years ago. Still stuck on it!

Kenner (Movies in the Attic) and I had totally different takes on II and III, where he liked II more, and I liked III more. If you're Horschak (sp?) fan, though, you'll love II.

As I was saying on Sutekh's, this movie kind of left me with a dirty feeling. The inbreds and where they lived and whatnot was all too gross for my liking. I can see how someone might look past that and enjoy the silliness of some parts.

I definitely agree with you on the rednecks. The movie needed to be sillier (and have better action) like Cobra.

Fun write up - I need to go back and watch all three, but I wonder where guys hide surveillance wire now that mullets are out of style? btw - last time I was at Wal-Mart they had Renegade for $5 and I think it was the whole series.

Thanks! lol good point about the mullet.

Also: that is a killer deal for Renegade!