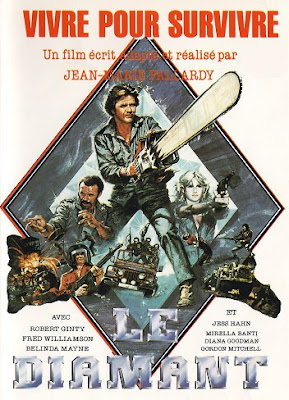 Now here's a weird one. Imagine if someone threw a bunch of film reels from different drive-in movies in the air, and used Robert Ginty's chainsaw you see above to wildly slice them at random. Then they spliced them all together and stuffed the result in a projector. The result would undoubtedly be...WHITE FIRE!

In this highly entertaining monument to nonsensicality, Robert Ginty and Belinda Mayne play brother and sister Boris "Bo" Donnelly and Ingrid Donnelly. When they were children, their parents were killed by soldiers. The man who saved them, Sam (Jess Hahn) is now their friend in adulthood, and they live in Turkey. He has a sleazy associate named Peyton (at least we think that's what his name is). What are they up to?  Apparently, Bo and Ingrid stole some diamonds and some bad guys want them back. Gordon Mitchell plays Olaf, a man who works in a futuristic diamond mine where they wear crazy outfits and torture and kill people. A gigantic diamond called "White Fire" is in the mine, but if anyone touches it, they melt. Then it gets really crazy. 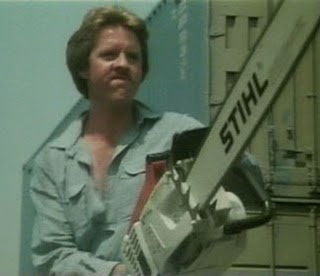 Many bad guys are after the Donnellys, including the Italians Sophia  (Banti), who has a hilarious accent,  and Barbarossa (Benito Stefanelli), not to mention an army of mustachioed Turks. During a brawl, Ingrid is "killed". Bo is crushed because they had such a close relationship (a little too close...more on that later) so he goes to drown his sorrows at the local watering hole. After the prerequisite barfight, a woman named Olga (Diana Goodman) comes home with him. She has blonde hair like Ingrid did, so, naturally, Sam suggests, "She could be Ingrid. We could replace her", or something to that effect. Of course, Olga goes along with the plan and goes to a bizarre castle populated only by women in diaphanous scarves and gets plastic surgery. Now she looks like/is Ingrid. Now Bo can fall in love with her without technically committing incest. But there's yet another wrinkle. Noah (Williamson) is after Olga because he is a pimp and she is a prostitute that escaped without paying him some money (that's the best we could make out of that unfollowable jumble of a subplot). 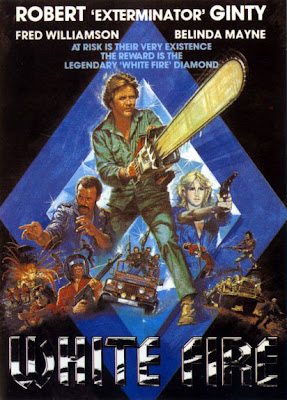 SO! Will Bo and Olga/Ingrid ride off into the sunset with the White Fire? Or will Olaf and Noah get their way? And one other thing...what the HELL is going on?

I'm sorry if any of the above came off in a negative way. Despite the fact that the "plot" is as jumbled, silly and nonsensical as any Godfrey Ho epic, White Fire is actually a lot of entertaining fun. You just have to be the type of person that can accept the fact that the plot is, let's just say, "non-traditional". 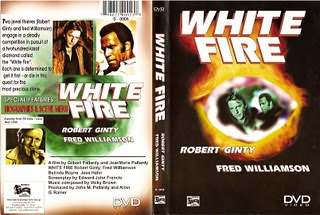 White Fire is a cinematic oddity consisting of crazily choppy editing, nutty sound effects, loud, laughable dubbing, and riddled with bizarre jump cuts. And that's just the technical side. The plot is just a bunch of loose strands that make no sense. Add to that the Jon Lord-related soundtrack (two songs, the fast, title song and a sensitive ballad they repeat over and over, presumably by the band Limelight). It has all the exploitation goodies, over-the-top nudity and violence, and of course the "bad" acting...but what really sets this apart is the relationship between Bo and Ingrid...and Bo and Ingrid/Olga. It's just so weird all the way around.

Fred Williamson is here in a rare bad guy role, and Ginty and the others wear some pretty amazing fashions. For fans of true cinema weirdness, if you haven't already discovered it, there's a rich mine of greatness to be found in White Fire.

I've been trying to figure out what my next Williamson movie will be, and this is a strong candidate, especially when you add in the Gint-inator.

I definitely look forward to your opinion of the movie! It is pretty weird at times!

OK, the plot summary made me laugh my ass off, especially the Fred Williamson being a pimp part.

Happy you enjoyed the plot summary! the movie is very odd and Ginty is at his best!