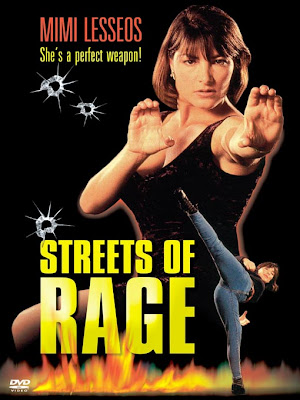 
Melody Sails (Lesseos) is a strong, independent woman of the nineties. She is working as a fact-checker for a newspaper in the L.A. area, but hopes to be a reporter. In her quest to get a great scoop so she can impress her editor, Harrison (Tony Gibson) and join the official roster of the newspaper, she begins interviewing street kids and runaways. She goes to skid row, getting down and dirty at halfway houses and seedy pizza joints where these ragamuffins hang out. In the course of her investigation, she meets a 12-year-old panhandler named Steven (Gold) and an older teen named Candy (Juli James). They end up staying at her house and they become close. Because she is a former Special Forces Commando, this high-kicking newsgal can protect them, and herself.

But interrupting all this is a malevolent presence on the streets. A diabolical pimp with a British accent named Lunar (Page) is killing prostitutes all over town and people are scared. He just sits in his limo and lets his goons do all the dirty work, most notably Gokor (Chivichyan). Meanwhile, Melody is being courted by a number of men, including a cop, a Texas art collector, and a co-worker at her newspaper. Which one will she choose? Is one of them secretly a connection to the diabolical Lunar? What will happen to her beloved street urchins?

Yes, Street of Rage does have a very cheap video look. Yes, it has the "production values" of a family home movie. Yes, that extends to the sound, where you constantly hear cars going by in the background. Yes, almost everything about it is hugely amateurish, especially most of the acting. But as I always say, stop being so critical. You could tell Lesseos (who wore a lot of different hats on the production) was trying. She got this movie out there. You didn't. Stop being such a hater. Lesseos has a likable personality and presence, and she also has some cool moves, even if they are awkwardly choreographed at times. She resembles a more athletic Anjelica Huston. It would be awesome if she and Cynthia Rothrock had a long, intense fight scene in a movie. Maybe that will happen someday.

But the movie just gets everything off on the wrong foot because of the title. For most people, Streets of Rage is one thing and CAN only be one thing. The legendary Genesis game. The game came out in 1991, so here they have no excuse. There's a lot more rage on the streets with Axel, Adam, and, most relevantly, Blaze, than there is here.

Taking a cue from movies of an earlier vintage, the music score is drenched in plenty of smooth sax. Take that, Fortune Dane (1986). Pleasantly, the film ends on a freeze frame, and behind the credits are clips from some of the scenes we just saw. Speaking of credits, a special thanks went out to Joseph Merhi, and it's easy to see why.

As far as Gokor is concerned, perhaps they should have given his character a different name, because it sounds like everyone is calling him "Go-Kart". An interesting name for a baddie, to be sure.

So for Z-grade martial arts action, check in with the good-natured Lesseos...but don't get on her bad side.