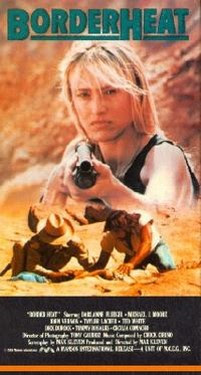 
Here's another one by director Max Kleven, whose best movie is Ruckus (1981), which is not yet reviewed on this site. In the tale at hand, Deadly Stranger, a mysterious drifter rolls into a quiet, dusty ol' town in California. His name is J.C. Ryan (Moore), and he is yet another unshaven, mullet-headed goon/hero. The local rednecks have it in for Ryan from the moment he sets his foot in "their" town. Blackmailing him after goading him into a fight, they force him to work in the fields with the illegal Mexicans picking peppers.

There, he befriends Juan (Tommy Rosales, of Kleven's W.B. Blue and the Bean, 1989 where he played...The Bean). Ryan soon meets and develops a relationship with the plantation owner, Mitchell (Vernon)'s mistress, Peggy (Fluegel).  Because the owners and union bosses are corrupt, extorting the illegals and killing them if they don't pay up, Ryan and Peggy decide that "union racket money's the only way to fly", and they hatch a plan to steal the ill-gotten gains and ride off into the sunset. But will that be possible, with such muscle as Smitty, Red and Bubba out for blood? Will there be a twist that ensures the scheme doesn't go exactly as planned?

Michael J. Moore, not to be confused with the pompous blowhard without the J, does a competent job as the loner in town whom the authorities are constantly hassling (have we ever seen that before?). Although it would be funny to see the other Michael Moore try to play the role of "the hunk" that MJM plays in this movie. Rather, try to imagine a cross between Lorenzo Lamas, Tom Green and Ron Silver, and you may get the idea. The movie is similar to Lamas' Snake Eater (1989) in some ways, and deals with the Mexican border, in a fairly sympathetic manner, and can also be compared to Border Cop (1979). Ryan is handy in a barfight and the local crackers hate him because, and I quote, he "associates with wetbacks". Ryan cares about their plight and wants to help them, especially Juan...but he gets in a whole heap o' trouble.

Darlanne Fluegel is always nice to see and is a genre staple. She puts in a quality performance here as the sassy, no-nonsense gal with plenty of plans and dreams. The world could use a few more like her. The legendary John Vernon plays the main baddie with barking aplomb, but we don't see hide nor hair of him until 57 minutes into the film. Then he's drinking, smoking, gambling and carousing with prostitutes for the rest of the running time. I'm sure he had fun. Like Rosales, he also appeared in W.B. Another unfortunate character to reappear in W.B. is the extremely annoying Mexican stereotype character. His name in real life is Wayne Montanio, and he is primarily a stunt actor.

While it is funny that the main cadre of rednecks watch Wheel of Fortune round-the-clock (they must tape it), and there are a few fight and chase scenes, the main problem with Deadly Stranger is that it's not really an action film, it doesn't have a real, serious message about the issue of illegal immigration or unions, it's not really anything. Plus it's too long. While it can be unfavorably compared to Road House (1989), it is something of a Bonnie and Clyde tale that is basically a drama that got lost in the VHS shuffle.