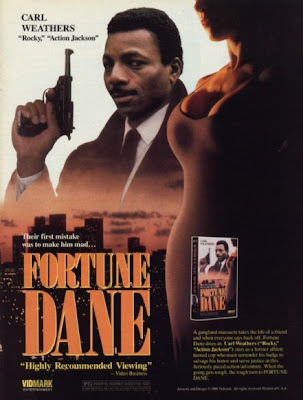 Det. Fortune Dane (Weathers) is a hotshot on the Washington D.C. beat. He's a former pro football player that decides to go into law enforcement. When an assassin named Warlock opens fire on everyone in an illegal gambling house with a machine gun, he didn't count on one thing: FORTUNE DANE! Dane is especially mad because Warlock murdered his midget friend Augie. Unfortunately Dane was on the premises when it happened, questioning the pit boss of the gambling house, who claims the mastermind of it all, who Warlock works for, Dexter, tried to involve him in a point-shaving scandal.

Meanwhile, in the midst of the investigation, Dane develops a relationship with big-haired D.A. Steiner (Alberta Watson). On top of all that, there is a very dramatic showdown between Dane and his elderly father. Dane was adopted and became an overachiever in order to please his father, a bank owner. Dad got in some trouble because he wouldn't accept illegal bailout money. How relevant to today.

Dane gets a suspension from the case because Internal Affairs is on his back. He ends up in "Bay City" where the Warlock chase continues. The Bay City cops don't believe he's a cop at first (probably because he's so smooth) but let him go on his merry way because they really want to take down Warlock and Dexter. What will happen next?

It seems Fortune Dane was a short-lived TV series, and Vidmark video released "parts I & II" on VHS. Apparently there are five episodes, which makes sense because the tape ends with some unanswered questions...

The intro is worth watching because it repeats the words "FORTUNE DANE" over and over again while Carl Weathers works out and gets dressed. Something for the ladies. It's pretty funny. It looks like an 80's workout video more than anything. Hey, it's a great name. It's funny when his young nephew, in a high, squeaky voice says "Hi Fortune!" They say the name a lot, but why not? It's fun to say.

Weathers is charming and likable as Dane. Apparently he was involved behind the scenes because Fortune Dane is a "Stormy Weathers" production. He wears a different stylish outfit in every scene. This is, in retrospect, a precursor to Action Jackson (1988) and Hurricane Smith (1992).

A highlight is the sax-blaring soundtrack. Not to fear, the jazz is as smooth as Fortune himself. Practically after every scene, there is a quiet storm. Mellow.

A TV show cut down before its time, I tell ya. The question isn't why Vidmark released it, but why they only released part of it. While it isn't extreme in one direction or another and there are some run-of-the-mill moments, if you ever run across it, don't run from this great 'Dane.

Certainly does look like an Action Jackson serial. Where do you get all your VHS Ty?

I get all my VHS from different places. I used to work at a video store in Hamden, CT and collected a ton of action movies. Now, I usually buy VHS from sellers on Amazon.com

Nice one! I have often thought there would have been a lot of fun to be had working at a video shop when VHS was still around, and a lot of opportunities to get some cheap videos!