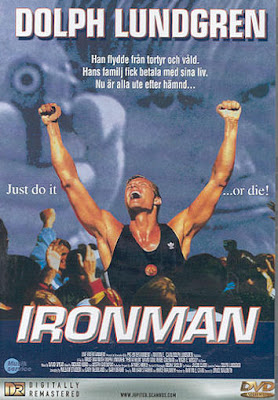 
Dolph Lundgren just may be the greatest living human. He can sing, dance, act, produce, direct, do martial arts, all while doing a rockin' drum solo.  He excels in every sport he tries, and according to his bio, he received a Master's degree in chemical engineering from the University of Sydney in Australia and was awarded a Fulbright Scholarship to MIT. So he's light years away from his legions of meathead imitators.

Keeping his Superman status in mind, here, in Pentathlon, Lundgren portrays Eric Brogar, a Pentathlete (yes, it's a real word), who is trained in East Germany pre-Berlin Wall falling to compete in the Olympics by tyrannical jerkbag Heinrich Muller (Soul). Muller wants to use him as an example of East Germany's greatness, but Brogar is actually a sensitive soul who wants more out of life. He loves America, so he risks it all to come to the USA, using the American Olympic team to help him. He thinks he escapes Muller's iron fist forever.

Now in L.A., Brogar has hit the skids. He drinks, smokes, eats greasy food and lives in a dive. He even works in a greasy spoon. His boss John Creese (Mosley) is a kind, charismatic man that tries to get to know Brogar. When he discovers Brogar used to be a Pentathlete, he takes it upon himself to train him and get him back into shape for the Atlanta Olympics. Meanwhile, Brogar romances fellow Olympian Julia (Coleman). Things are starting to look up for Brogar, but then Muller, who now is the head of a neo-Nazi organization, tracks him down. Brogar must fight to protect what he now has, his bright future, from the shadows of his dark past. Can he use his Pentathlon skills to fight in real life? 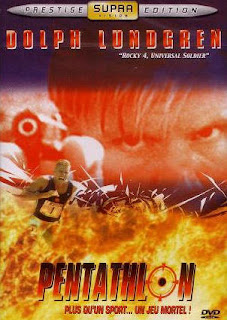 A Pentathlon is an Olympic event that consists of Shooting, Fencing, Swimming, Horse Riding and Cross-Country Running. Surprisingly, it took until 1994 for someone to make an entire movie around this concept. The natural choice for star was Ubermensch Dolph Lundgren. He's pitch-perfect as Brogar. It's impossible to imagine anyone else playing this role. But really, Pentathlon is a weird movie. It's pretty offbeat for a Lundgren/action film. It's sort of a sporting movie, with the pain of the Berlin wall experience thrown in, and some Nazis, and some romance, and some training, and Dolph fighting the baddies. It's certainly different. But in this case, different is good. We liked Pentathlon. It's not a cookie-cutter action flick. It strives for more, much like its hero Eric Brogar. 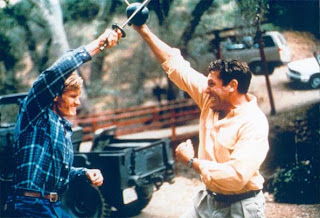 We thought fencing movies started and ended with Ring of Steel (1994). But we were mistaken. Robert Chapin's got nothing on Eric Brogar. David Soul is also great as the Nazi Muller. He really throws himself into the role and you hate him. He wants to crash the "Never Again" rally condemning Nazis and terrorists. Naturally the featured singer is some hippie singing "Peoplllleee are the saaammeee...." There is an inexplicable, hilarious scene in the greasy spoon featuring one of Muller's goons towards the end of the film. You'll know it when you see it - we don't want to give it away, but trust us, you'll be laughing. Hint: it involves a boombox.

Pentathlon is surprisingly different for a Dolph vehicle. Check it out soon.

This is one of my all time fave Dolph films. He was actually making this in an effort to help grow Modern Pentathlon's popularity. The idea is just too amazing for words for me. Also, on a personal note, in high school I put Modern Pentathlon as one of my activities in the yearbook.

As far as Dolph the Scholar goes, the reason why he never made it to MIT was the summer before his first semester, he was working as a bouncer in NYC, met Grace Slick (whom I believe he dated), and she got him the role in A View to a Kill, which from there got him the gig in Rocky IV. As you so rightly point out, he truly is an ubermensch.

That's really cool about your yearbook. Thanks for the extra Dolph Info!

A solid Dolph movie. It was actually Grace Jones that he was dating.

Dolph has had a great life!