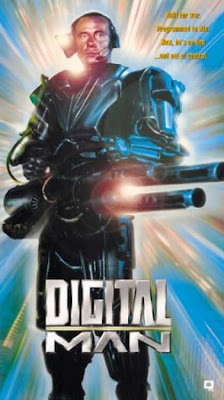 
In the future, if there is a situation too dangerous for human soldiers to go into, there is such a thing as the "D-1 Weapons System", or "Digital Man" (Hues). Such a situation arises when terrorists steal the launch codes for some nukes and demand 2 billion dollars in gold. Digital Man spoils their plans, but he uploads the launch codes on to his system. He then ends up in Badwater, Nevada, a small, dusty hamlet in the desert. When it is found out he has the nuclear launch codes, a special, crack team led by Anders (Olandt) is sent to Badwater to "take him off-line". Also there's some sort of stupid intrigue involving Adam Baldwin and Ed Lauter that is impossible to care about. So it's a scenario with a multi-racial team trying to stop Digital Man, Digital Man eluding them, and rednecks and trailer park dwellers such as Billy (the Swayze of the Don variety) interacting with all the high-tech goings-on.

Maybe it's just us, but we hate these low-budget sci-fi future movies. The dialogue consists of nothing but gobbledygook which is completely unrelatable to any audience. Thus they mentally "check out", lose interest and stop caring about the proceedings. Digital Man in particular is guilty of this, with very few, if any, likable characters. The most likable of the bunch is probably the emotionless supersoldier Digital Man. It's a perfect role for Hues. 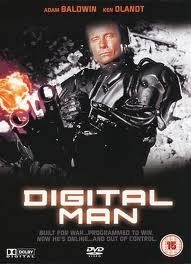 In 1995, CD-ROMs were huge, and this movie feels like one long, painful CD-ROM, with all the graphics and silly "morphing" effects that would entail. I've played flight simulators that are more thrilling than Digital Man. Flight Simulators.

Just imagine a mish-mash of Virtuosity (1995), The Terminator (1984), Neon City (1991), Robocop (1987), American Cyborg: Steel Warrior (1993), Hologram Man (1995), Circuitry Man (1990) and even the Sega Genesis game Vectorman.  The idea of the "sci-fi western" has been tried with everything from Westworld (1973) to Oblivion (1994). While the novelty of Don Swayze in a Chad McQueen-style sleeveless shirt angrily spouting lines like "You can't tell me what to do, robot!" in utter seriousness to such people as Matthias Hues is worth noting, Digital Man is just so dumb and tedious it wears off quickly.

For example, the weaponry the cast uses look like spray-painted leaf blowers, and robots die like the Itchy and Scratchy robots in that episode of The Simpsons.  The "crack team" does hone their craft, whatever that's supposed to be, by fighting "Virtual Ninjas" (you gotta figure the word "virtual" is going to show up sometime). The idea of a virtual ninja is cool and is probably strong enough to support its own movie. Maybe there will be a spin-off (please God not a sequel).

So while the movie does have a professional look thanks to the cinematography, and there are a lot of explosions, the only real reason to watch this is for Matthias Hues. Which is the only reason we watched it. So that works out. The climax does feature some Hues hand to hand combat, which is nice, because Hues walking around a trailer park with a leaf blower for 90 minutes sounds more entertaining than it actually is.

In the end, Digital Man seems like something you'd happen to catch on HBO or Cinemax in the middle of the afternoon sometime in the 90's. Sadly though, the strong B-movie cast cannot save the dire stupidity within.

You are so right, a mid-90's sci-fi movie has to use the word "Virtual" at some point. Were than any uses of "Log on", "Jack in" or "Information superhighway"?

Either way, a shame this isn't fun like American Cyborg. I'll steer clear.

There was so much nonsensical 90's sci-fi dialogue my brain has pretty much been numbed, but, yes, all those terms were used. And more. You're totally right, it lacks the fun of AM: SW.

Was tempted to buy this earlier - thanks Ty you saved me £0.99! Should have know better - this is Philip J Roth, he makes terminally boring sci-fi flicks like APEX and Velocity Trap.

Your welcome, Jack! Phillip J. Roth is a hack. The best part of the movie is Matthias Hues...He just can't save it though.