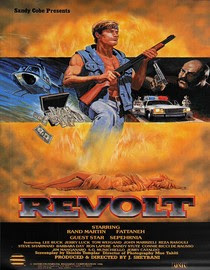 Starting like a classroom scare film about the evils of drugs, we get some hilarious narration from a very serious announcer (There's a drug dealer on that train!). It seems like a documentary, but then we are thrown into the tale of California family Steve Brown, his wife Mina and their son Jeremy. All Steve wants to do is run his Iranian restaurant "1001 Bites" (groan) with his wife and her Iranian family. But there's only one problem: the drug kingpin and anti-Iranian bigot MacIntosh. Since times are tough, Steve's brother George agrees to become a driver/drug runner for the nefarious MacIntosh. But George gets killed in action. There's the evils of drugs again. After some more characters bite the dust, it's "Action Restauranteur!" as the mustachioed Steve snaps into action and takes on MacIntosh, the corrupt and ineffectual sheriffs, all their goons, and, of course, the evils of drugs.

Revolt is a hidden gem if there ever was one. This movie is genius, and laugh-out-loud funny. Starting with some crazy credits (Screenplay by Shield, Still Photography by D. Victory, etc.), through to the industrial film-style first section, through to the unbelievably wooden non-acting, funny dubbing, wacky feigned punches and fights, and let's not forget about the out-of-left-field subplot about the Iranian hostage crisis of the late 70's/early 80's. "There's something about Iran on TV!" young Jeremy yells out, and pretty soon Jeremy is the target of schoolyard bullies who call him an "Iranian pig". This is, of course, just a by-product of drug smuggling as you will see when you watch the movie.

Of course, there's a wacky Chef Boyardee-like chef, and the main hero (Rand Martin?) is firmly in the Tom Selleck/Burt Reynolds mold. The movie is incredibly preachy and stilted, but that just adds to the fun. There's no end credits, just some synthesizer music over a black screen for a few minutes, and even still, the running time is 72 minutes. But it's 72 minutes of Awesome!

It's reasonably safe to assume this movie was made by amateurs, if not absolute beginners, but that rough-and-tumble, mistake-ridden style is fun and almost as addictive to watch as the drugs it so vehemently condemns. Interestingly enough, the film that Revolt seems to be most influenced by is the film noir The Phenix City Story (1955),  but imagine that crossed with Death Drug (1978), and you'll have some starting point to the insanity of Revolt, and there are elementary school plays that have more convincing acting and production values. But no matter, this is perfect for the waning drive-ins of the 80's and pure cinematic fun.

Adding to it all is the mysterious nature of the film. No one knows anything about it. There's no background information anywhere. If you have any information at all about Revolt, J. Sheybani or Rand Martin, or anyone else attached to the production, please write in right now! We have to know more about this film!

If you want to laugh, and you can find it, definitely check out Revolt!

OTHER NOTES/CREDITS: The Production Manager was Sharmahd, the Assistant Cameraman was B/Boatman, The Assistant Producer was Sha Zoria, the Assistant Director was Anusheh, the Technical Advisor was Ruben - Zadourian, and it was produced at Movie Tech Studio in Hollywood. According to the poster, it was released by Sandy Cobe, the head of Intercontinental Releasing Corporation. That's literally ALL we know about Revolt. Again, if you know anything about the film, contact us!

Wow, this looks amazing. Four star review! You are right, I did a quick google and there's nothing about this, not even on IMDB, just one post asking about the Greek VHS. Is that what you managed to get Ty? I'd be keen on seeing this one!

I would love to hear your opinion on this insane movie!

We saw it on Netflix Instant Watch. How it got to Netflix is a total mystery.

Wow! Is that something you could record to DVD? This movie is seriously nowhere!

Unfortunately, we can't record instant watch movies. Wish we could though!

I was in this movie, I played Jeremy.
I would love to find a copy of this movie as the director is dead and I have tried to look for it at foreign video stores.
I was about 12 when I did this movie for my parents friend J Sheybani.
If anybody knows where to get this film I would be so happy.

As far as we know, Revolt has never been released on VHS or DVD. To see it, you need Netflix streaming in America. Can you tell us anything else about this movie? What are your memories of it?

Sheybani was a well known Iranian director who directed this movie towards the end of his career. He was also a songwriter. He actually was trying to make a very serious movie so that Americans could get a glimpse into the discrimination that Iranians felt in this country during the hostage crisis. As far as the drugs...I have no idea. Maybe just the 80s. The mother, Fataneh is a very famous Persian singer. Shebani wrote songs for her, and she acted in the movie as a favor. He also wrote songs for my mom. They traded me and my amazing acting ability for her songs. It was filmed in Malibu and Glendale, not in a studio, with no permits. All the American actors were SAG actors.

Thanks so much for the information. We really appreciate it! Write back anytime!

I just finished watching it. I saw it just now on MGM HOT Israel). Apparently, a mistake was made because the information given on the preview of the movie I wanted to see was mixed up with a movie on Hippies from 1968 called Revolution. I began watching it and soon realized the mistake. OMG!!!!!!!!!!!!!!!!!!!! It was hilariously bad at first --and then got worse and worse and worse. So bad that it was not funny any more, just a really bad 10th rate movie-- one big accident----
bad language, gang rape, and lots of violence. After watching this I felt like scraping out my eyeballs.

We respectfully disagree. Revolt is hilarious from start to finish!

You know, Ty, I think you are right. It is hilariously bad from start to finish. I was feeling a bit miffed about not seeing the movie that was supposed to be shown on t.v. no matter. I found it on youtube just now.

It was a good omen! You were meant to see Revolt!

This is the guy you're looking for. the J. stands for "Jamshid." Sheibani made a lot of films in Iran before coming to the U.S., those are listed in IMDB:
http://www.imdb.com/name/nm1437494/

Thanks for the info! We really appreciate it!

I'm really curious about this one, it came up on Netflix because I had seen so many other Iranian films.
I can't figure it out for the life of me; the speech is doing that weird thing where you can't figure out whether it's dubbed or not. As a bonus, at one point where the subtitles (I always watch films with subtitles enabled, even in English) said "(unintelligible)" I swore I heard the guy say, "al-an!", meaning "now!" in Persian, which would have fit the context of the scene perfectly. So, wtf? Was it filmed in Persian and dubbed in English? Half and half? So freaking weird...and now Netflix says they're going to remove it soon. What a bunch of pricks. I hope they choke on a 100 toman bill.

It was a mix of English and Persian...this movie is a complete mystery...Some of it was shot in the U.S. though. Netflix should always have it on streaming.

It was released on VHS in Argentina: http://www.rarovhs.com.ar/2013/11/revolt-1986-pelicula-irani-solo-editada.html

Cool! Would love to own this one day.

Can you say: "The Next Samurai Cop?"

Haha! It should've have that cache. It deserves to be on a better format than nowhere.

DVD Copies available from Streaming of Film... Contact me at jambler2002@yahoo.com

Thanks, Jeremy for the update! Still very cool you were in this movie.