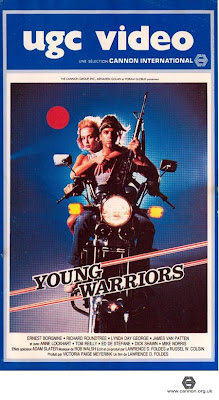 Kevin Carrigan (Van Patten) is a recent graduate of Malibu High and now is studying animation at Pacific Coast College. All he really wants to do is party down, drink beer, invite babes over to his Phi Delta Tai frat house, engage in quasi-homosexual frat initiations, and did we mention he also just wants to party down? His buddies Fred (Norris), Scott (Tom Reilly), and Jorge (John Alden) are all in on the carefree fun. But when a mysterious gang of bikers rapes and kills Kevin's sister Tiffany (April Dawn), Kevin changes. He realizes there's more to life than keggers and pranks, and he becomes sullen, distant and just plain weird.

Tired of what he sees as too much police incompetence, signified by his own cop father, Lt. Bob Carrigan (Borgnine) and his partner Sgt. John Austin (Roundtree), these former frat-house knuckleheads go out on their own in a jeep with their beloved dog Butch (Casper the Wonder Dog) and try to solve the mystery of his sister's assault. But Kevin and his cronies get deeper and deeper into the seedy underbelly of the city - and its culture of extreme violence - and people like Kevin's mother Beverly (Day George), his girlfriend Lucy (Anne Lockhart) and his professor Hoover (Shawn) - worry Kevin has lost the plot, as well as his mind. Will Kevin's newfound obsession with violence consume him and everything he loves? 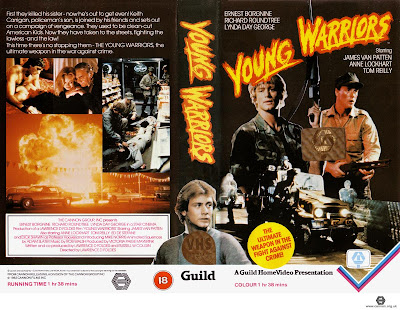 In this pickup from Cannon, which infamously combines the 80's teen sex romp and violent revenge genres, we see a major flaw: the movie, despite all the action and shooting and such that we see, actually has an unpleasant, anti-revenge motif. Obviously director/co-writer Foldes didn't realize what audience he was making this film for. You can't make a relatively entertaining, if misguided and overlong, exploitation film catering to drive-ins and hounds of that genre, and then turn around and say "violence and revenge is wrong; don't do it". That's really lame and hypocritical. Just blow up the bad guys with a missile launcher and save your whiny treatises for your shrink (i.e., make a different, less confused, movie).

Another flaw is that our "heroes" are unlikable and you don't care about their plight. The whole first half of the movie is carefully setting up our protagonists as frat-boy jerks. Would it have been so very hard to NOT have done that? So when Kevin flips out and becomes addicted to going out and "fighting crime", the transition isn't as dramatic as it could have been. You know he's really out of it when he wears his bandanna around in daily life. Also we don't know anything about the bad guys or even who they are. They are not established at all. So we don't really even know who Kevin and his buddies are fighting, which detracts from the conflict. 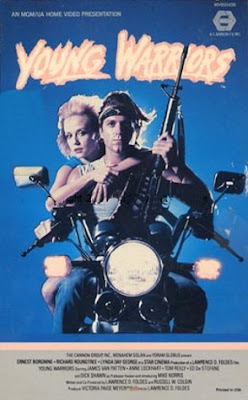 So we have a rockin' title song by Lennie Gale, and the film is dedicated to legendary director King Vidor. I'm sure he's thrilled about that. For some reason, Kevin's father is elderly, and Dick Shawn plays the college professor Kevin talks to, where we get the annoying comment on violence the film puts out there. The theme "violence destroys us all" is just irritating for this type of film. But in the plus column we have Casper the Wonder Dog as Butch. He wears sunglasses and a hat, and, like we've seen so many times before (Killpoint, 1984, and Fist Fighter, 1989) come immediately to mind), he steals the movie. 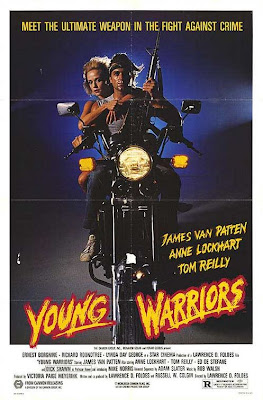 Released in a big-box VHS in the U.S., for all its foibles, there's still some meat on the bone for 80's obsessives to enjoy with Young Warriors.

This sounds like a pretty hardcore sack-of-asscrack. I think you hit the nail on the head about how this should've been, especially with Borgnine and Roundtree.

It is a tough sit. If only Borgnine and Roundtree served up some vigilante justice. It would have been a classic.

Love the movie (hey, at least they took the dog out with them) and it had the MASSACRE AT CENTRAL HIGH vibe about it (being a semmingly multi-genre flick)
Sadly the old GUILD HOME VIDEO release in the UK was cut to shreds. Never been re-released on VHS or DVD.
Wasn't this movie a (supposed) sequel to MALIBU HIGH?

Poor Casper The Wonder Dog! Looked into if Malibu High is a semi-sequel to Young Warriors. Couldn't find a connection. But they are similar in a way because they have romp elements and serious undertones.

Seen this movie back in the VHS days and don't remember much of it.
I have read that this was supposed to be a sequel to MALIBU HIGH and was originally titled THE GRADUATES OF MALIBU HIGH until Cannon pictures changed it to sound more action-packed. It's also directed by the producer of MALIBU HIGH.

It does have a more comedic element than action...It needed more Borgnine though.

Saw it at the old Allerton movie theatre in the Bronx before they tore it down. Very hard to watch.

That's really cool you saw this in the theater!...but at the same time, the movie was pretty weak. Except for Casper The Wonder Dog. Haha.