Directed by: Robert A. Ferretti


The Haden family consists of father Don (De Young), mother Sharon (Lenz), son Brian (Schwartz) and daughter Jennifer (Trilling). They are an "average" suburban upper-middle-class clan with the normal preoccupations and concerns of a modern family of the 80's. Don and Sharon's marriage is on the rocks primarily because she wants to take a job in San Diego so they are constantly bickering, Jennifer is your standard spoiled, self-involved teenager and Brian is the pre-teen eager to get in his dad's good graces. They decide the best way to sort out all their problems is to go to "Uncle Billy's Cabin" in an RV. So they rent the motorhome and head out on a family road trip into the countryside.

Meanwhile, some dangerous convicts are on the loose. They escaped a prison-transfer bus and are armed, dangerous, and looking for a family like the Hadens to provide them with...something. We don't really know. But Armitage (Stallone) is the the pugilistic neo-Nazi, Cyril is the "token African-American", Mitch (Michael Watson) is the confused "new meat" and Jack (Factor) is the Vietnam vet who is mentally disturbed and still believes he is fighting the war, and they take the family hostage. The twist is that the father, Don, is also a 'Nam vet (an ex-Green Beret), and will, eventually, after a lot of stupidity, attempt to save his family from the mixed bag of baddies. Can he do it? 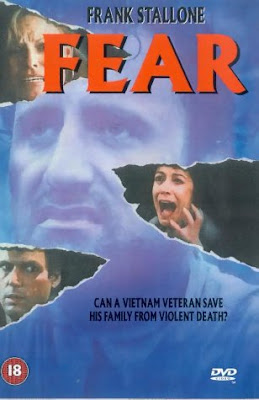 The film starts out with some Vietnam flashbacks, and leads into a bleak, gritty prison setting, so you think there's a chance this might be better than average. Once Fear kicks into being a standard hostage drama that adds nothing whatsoever to that sub-genre, you quickly realize that this is by-the-numbers, predictable fare. Some quality actors try to save it, but it's hopeless. It's just not exciting or entertaining.

Other aspects of Fear worth noting are the visit to "Link Reilly's Country Feed Bin". Just you watch out for that Abraham Lincoln Reilly (Bart Burns). He's yet another Vietnam vet. Also there seem to be two versions of Fear - one with all the swearing intact, and another one with the "dirty words" redubbed in a weird, yet hilarious fashion. I've seen the Virgin Vision VHS, as well as the version now playing on Comcast On Demand, and the On Demand version is redubbed with bizarre, "who are they trying to fool?" ADR, perhaps best exemplified when Frank Stallone aka Armitage shouts angrily, and I quote, "Fight You!" Why they did this is unclear, because other content in the film pretty much ensures this isn't going to be played on TBS anytime soon. It remains an R no matter what. So....why? 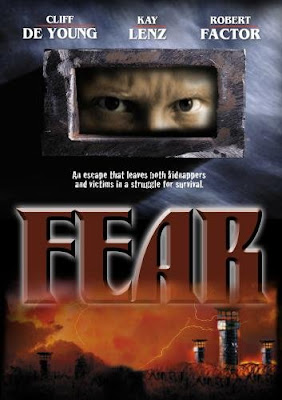 This might also explain why, in the only recorded instance in history outside of Gary Busey in Bulletproof (1988), does one character actually say the word "Butthorn"! We rewound the movie to make sure. He says it. This adds fuel to what we said in the Bulletproof review, that "Butthorn" was an insult that really should have caught on, and an effort was made to put it in the popular consciousness, but somehow it just never took off. Despite the best efforts of Frank Stallone and Gary Busey. If that team can't make something work, I don't know what to believe in anymore.

So after a lot of yelling, shooting, and unnecessarily terrorizing a family, I suppose the viewer was meant to come away with the clash of values between the family and the convicts. They're from two totally different worlds, and they clashed. The innocent family ran headlong into the totally new, different, violent world of the criminals. Then the family is supposed to realize that their life isn't so bad after all. But the viewer just doesn't care that much to get that invested.

It may sound harsh, but Fear is really just VHS shelf-filler for the video stores of the 80's and 90's. It needed some kind of spark to make it stand out from the crowd, but sadly, that never happened. And Frank Stallone doesn't even sing.

Frank was great in BARFLY (with his classic line "I wouldn't wanna be you, if i were me")

I agree with you Lee! Great Role. Also his music career is still going strong! Have you're listened to the Frank Classic: Bad Nite from the Over The Top (1987) soundtrack?

Same Here! If only they actually delivered on the tagline! Frank Stallone on a killing rampage would make a cool movie.

... how the fuck is Frank Stallone unchained when he dies a half hour in the movie???