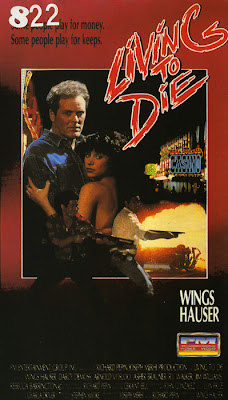 In this PM production, which can best be described as a low-budget thriller with a huge film noir influence, Wings Hauser (who also directed the film) plays Nick Carpenter, a streetwise ex-cop in Las Vegas. His friend Eddie Minton (Brauner) is being blackmailed, so Eddie calls in Nick to help sort out the situation. It seems Jimmy Fargo (Vosloo) is behind the blackmail, but there are so many twists and turns it's hard to tell what's what. Minton is a corrupt, vain, selfish casino commissioner, and when Maggie (DeMoss) enters the picture, things get even more complicated. Will Nick be able to untangle the web of deceit and betrayal?

While Wings' direction does expose the film's low budget pitfalls, such as some plot/editing clunkiness and amateurish acting at times, considering what he had to work with, he acquits himself admirably and got the absolute most out of what he had to work with, which is commendable. It's wrong to look for perfection, just give us a snappy, entertaining movie, which is basically what Wings does. Somehow, in this neon-soaked Las Vegas tale, some scenes are very dark and hard to see. But there are many strengths as well to Living To Die. 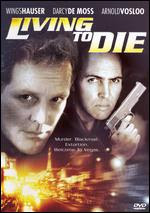 For example, there's the aforementioned film noir style, which Wings clearly is a fan of. There is some memorable dialogue, such as "I'm not here to borrow trouble, but I can afford it", and "Trouble and beautiful women seem to travel well together". Lines like these could have been said in classic noir movies like Kiss Me Deadly (1955) or The Big Heat (1953). The infamous Asher Brauner's performance here could be termed "Asher Unleashed", as the man goes off the chain with his unrestrained yelling and zero-self-control performance. It really makes you dislike his character, Minton (it sounds like everyone in the movie is calling him "Mitten" and it was only the end credits that made us see his name was not in fact Mitten). But maybe that's the point and Brauner is a genius actor. The jury is still out.

Sadly, Wings and Brauner never worked together again after this outing. They seem to work well together, I wonder if they had a falling-out? Maybe Brauner was jealous that Wings got to race a go-kart against some kids in an outdoor go-kart track. But Wings redeems his cool factor as he cruises along the Vegas strip on his motorcycle, no doubt seriously pondering the questions of loyalty surrounding Maggie and Minton he has embroiled himself in. 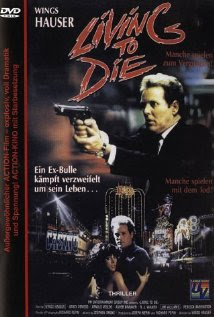 No movie of this kind would be complete without a saxophone soundtrack, alternately smooth and blaring, and, to Living To Die's credit, it actually credits the sax solos to one Lon Price. Wings must be a fan. He wouldn't let Mr. Price's blowings go unappreciated.

Featuring an eyebrow-raising unorthodox ending, Living To Die is a good piece of the puzzle for PM or Wings completists.

I'm about to do Marked for Murder, and I was thinking, not only have I not done a Wings movie in awhile, neither has Ty, and then, almost as if in answer to my thought, you hit us with Living to Die, which looks like a real gem. Great stuff.

Thanks! Living To Die is a silly and fun PM flick. Always wanted to see Marked For Murder! Looking forward to your review of that.

I haven't seen a ton of Wings Hauser's work, but his performance as Ramrod in Vice Squad is the stuff of legend. This looks like a nice slice of PM fun, and even has Arnold Vosloo to boot (for my money, the best part of Hard Target.)

Wings is at his absolutely insane best in Vice Squad! Another Wings classic is L.A. Bounty with Sybil Danning.

Also definitely agree with you about Vosloo in Hard Target. Van Damme's mullet was funny though!