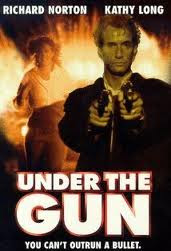 "You Can't Outrun A Bullet."

Comeuppance Reviews fan favorite Richard Norton stars as Frank Torrance, a man under so much pressure, he makes "Stressed Eric" look like a pot-smoking sloth. A former star hockey player, Torrance now owns his own nightclub, named Boilermakers after his old team. The problem is, he is deeply in debt, and the Italian mob as well as the Triads have him in their sights. He is also involved in a war with an army of corrupt cops and DEA, led by the evil, eyepatchioed Det. Dexter (Robert Bruce). Add to that, every slimeball in the underbelly of society has a beef with Torrance. He's trying to escape it all and fly far away somewhere with his wife Sandy (Badler), but even his flight plans are going wrong. He must use his wits, and of course his formidable martial arts skills to solve his many stressful problems all in one night. Can he do it, or will Frank Torrance be "Under the Gun" his whole life?

As Co-Producer and fight choreographer on the film, as well as starring, Norton wore many hats. Was he as stressed as Frank Torrance during the shooting of the film? The back of the DVD box says "likable action star Richard Norton stars...", and it is true, Norton does turn on the charm for this role. He had a lot of creativity with the many, many fight scenes in the film, even sporting some of the first "mop-fighting" scenes since The Toxic Avenger (1984). He even does some MMA-style takedowns, which was pretty awesome for 1995. It's a joy to watch Norton fight, as well as act, it truly is puzzling why he isn't really known outside of action movie circles. He's supported well by Peter Lindsay as his old buddy Harry, and Kathy Long as Lisa, who is not too shabby in the action department either. You may remember her from Albert Pyun's Knights (1993) or the Cynthia Rothrock vehicle Rage and Honor (1992). Her career should have been bigger as well. 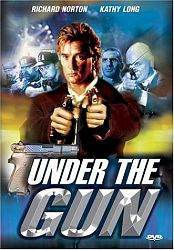 We did have some issues with the film, however. The fact that it takes place all in one location, the nightclub, shows its rock-bottom budget, as does the fact that some scenes are lit too darkly to see. It would have been nice to see Norton and Long fighting the baddies in different scenarios and places. Also the movie feels unfocused and unclear at times, with not a lot established. With a more streamlined, linear drive, Under the Gun could have been an all-time classic.What they were able to achieve with the budget they had IS impressive, so let's not forget that.

As it stands now, Under the Gun is a solid Norton vehicle that displays the man's range of talents. While not perfect (but what is?), fans of the Awesome Australian Action man should seek out Under the Gun.

Glad you guys had fun with this one. It's definitely overstuffed as far as plot points and random characters, but I thought this was part of its charm. They also make no attempt to explain where the film actually takes place or why all these characters have completely different accents. In any case, it was nice to see Norton featured so prominently since he usually gets cast as the buddy or villain.

I definitely agree with you on the plot points and characters and Norton was at his best here.

We have a couple more Norton movies coming soon like China O'Brien and Deathfight!

This is one I had on my radar for the next Norton flick. I like that he has a lead role, so it may have jumped near the top of the list.

Nice! Definitely looking forward to your take on it, DTVC!