It seems the nefarious Carter Rangoon (Hiona) has kidnapped the daughter of an American Senator (Brown) and has her held captive at his training camp for baddies somewhere in Thailand. Said Senator does the only rational thing he can do in that situation - he calls Black Belt Jones! This time around, Jones (he is simply known as "Jones" and no mention is made to his "Black Belt" status) enlists the help of comical fat guy Leonardo "Rhino" Pizzarelli (Memmoli), a competitive eater and all-around wild man, Johnny Chicago (Binney), the counterpoint to Rhino, a "hunk", if you will, and the local woman Pam (Tsu), enlisted to be their contact in Thailand. Will our mismatched team of heroes fight through an endless stream of wacky baddies, silly obstacles and childish music and sound effects to save the girl?

Basically an unfunny comedy that becomes really tiresome really fast, Hot Potato is Saturday-afternoon-style fare. With its PG rating, America's Funniest Home Videos-style sound effects and cartoonish score, it might be perfect for a kid in elementary school that wants to get into martial arts cinema but can't see the more violent entries in that genre. The extended (read: filler) fight and stunt scenes are filled to the brim with slapstick and have all the edge of the fights on the 60's Batman TV show. Again, that's fine if you're a kid, but these kind of juvenile antics will grate on the nerves of adults. 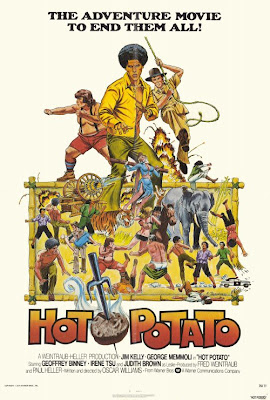 While Black Belt Jones (1974) is basically beloved by everyone that's seen it, and deservedly so because it has a certain verve, Hot Potato is just self-conscious. Yes, Kelly makes some funny faces, and there are some beautiful locations, shot very well in Chiang Mai, Thailand, and it is a professional, Warner Brothers production, but it is watered-down mainstream Kung Fu for the masses. No characters are even remotely developed and it becomes a slog at a certain point. It's a childish adventure picture, and while it is somewhat amusing to see people getting kicked, punched, maimed, and in some cases presumably killed in the name of high-spirits comedy and fun, somehow it never really gels or works. 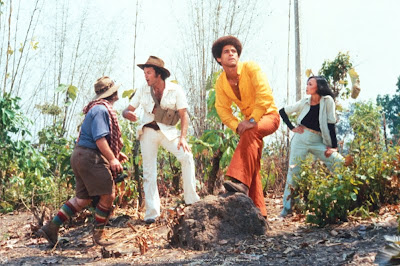 If you ever get a hold of Hot Potato, simply fast forward to the end credits, as there is a montage of the "best" scenes in the movie. Seeing these highlights, you will get the same, if not a better effect as watching the movie and you will save about 90 minutes. Although you might miss the legendary Yuen Biao if you do. But then again, it's easy to miss him if you watch the movie straight through.

Anyone who wants their fond memories of Black Belt Jones unsullied should steer clear of Hot Potato.

Comeuppance Review by: Ty and Brett
Posted by Ty at 1.3.11

This one looks like it goes down as a "better you than me" movie, as in, better you had to watch it and review it than me! Thanks for taking one for the team!

Haha. No problem! It was really mediocre. We have a better Jim Kelly movie coming up on Friday.