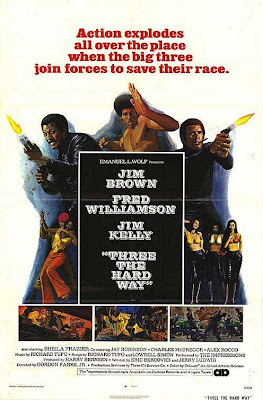 
When diabolical racist/fascist/evil white cracker Monroe Feather (Robinson), with the help of fellow evil whitey, scientist Dr. Fortrero (Richard Angarola) invent a red serum that is harmless to whites and lethal to blacks and plan to dump it in the water supplies of Washington D.C., Detroit and L.A., they didn't count on one thing - the awesome power of Jimmy Lait (Brown), Jagger Daniels (Williamson) and Mister Keyes (Kelly)! Can this team of righteous soul brothers take down Feather's budding, red-beret wearing neo-Nazi organization, or will millions of African-Americans perish?

They really, truly do not make them like this anymore. Films like this should be treasured. Just look at the tagline on the poster above. Can you imagine a movie coming out today that proudly, in big red letters, proclaims that they are going to save their race? Three the Hard Way, besides being a clever title (three dudes, three cities that must be saved, and three dominatrixes, but more on that later), is a golden age of blaxploitation gem. It is filled to the brim with jive talk, fly threads and funky tunes. It also has plenty of action, and who better to dispense it than the three coolest men in cinema at the time - all in one place! 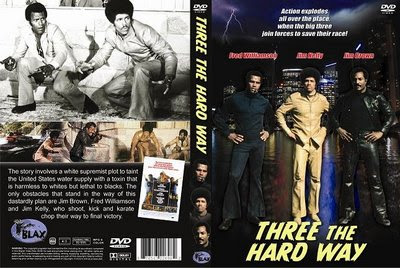 Jim Brown as Lait is a successful record producer. He's so good at what he does, his collars are bigger than pizza slices, he drives a Rolls Royce with "LAIT" as the license plate, and tells the Impressions what to do in the studio. He even produces his own theme song, sung by the Impressions! The action kicks off when Feather's goons kidnap his old lady, Wendy (Frazier), and Lt. Di Nisco (Rocco) is more interested in Lait than in the bad guys. So Lait calls in his buddies Daniels and Keyes to dispense some justice with a blue van filled with automatic weapons. Mister Keyes even predates Mr. T as being a legal name, and they even have the same reasons ("so people will have to call me Mister" - although T might have the edge because his legal middle name is a dot).

Kelly gets to make more of his trademark, pre-Billy Blanks funny faces and noises, and there's even a scene which must have fulfilled the fantasies of the urban, inner-city audiences this played to at the time, where a bunch of cops harass him and try to arrest him and he beats them all up with style and aplomb and rides away. Fred Williamson is as cool and charming as ever as the cigar-chomping Daniels. A standout scene occurs when three women, Countess (Pamela Serpe), Princess (Marie O'Henry) and Empress (Tsu) ride in on red white and blue motorcycles, with outfits to match. It seems they are a team of dominatrixes and this is how our Three the Hard Way boys get the information they need. Perhaps this was such an appealing concept it inspired the movie Ebony, Ivory and Jade (1976). 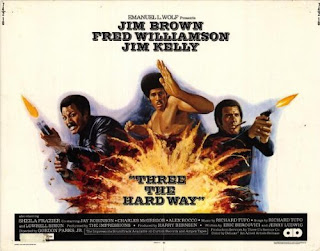 Three the Hard Way is a much better version of the team-up concept than the much later Williamson/Brown outing On the Edge (2002), and provides a lot of the obvious inspiration behind the parodies I'm Gonna Git You Sucka (1988) and Black Dynamite (2008). Additionally, besides the impressive on-screen talent (we didn't even mention an appearance by TNT Jackson herself, Jeannie Bell), there are some big names behind the camera as well - director Gordon Parks Jr, cinematographer Lucien Ballard, and a stunt department that includes Hal Needham, Bob Minor and Buddy Joe Hooker, among others...you can really learn a lot if you read the credits! All of this came together in the end to produce an above-average blaxploitation film.

While it does start to drag a bit right before the climax, travel back in time to when cars were gigantic and boatlike, and when Williamson, Brown and Kelly were the undisputed kings of soulful action.

Comeuppance Review by: Brett and Ty
Posted by Ty at 3.3.11

This looks great Ty. And at only $13 with three other movies, one being your previous review Hot Potato, it's going straight on my Wishlist.

We also have that DVD set and it is well worth the money.

Brown, Kelly, and Williamson. How have I never seen this? That is a kickass cast.

I paid something like $12 for a shitty VHS transfer of Black Belt Jones, but the Warner 4-pack of that film plus this one is obviously a far superior buy. Really need to check my impulses at the door before browsing on Amazon.

In any case, I love a good action team-up and you can't go wrong with this trio, so I'll be checking this out soon. Great review!

Grizzlybomb: It is definitely worth seeing! Everybody is at their best.

Karl: Thanks! The 4-pack is very cool and worth owning. Looking forward to your write up.

It's got three badass mofos - my favorite Williamson, and Brown and Kelly. It's action packed, it's cheesy and it's got all the fan-service you can wish for.

One of the better blaxploitation flicks I had the chance to enjoy.

Definitely one of the best.

Corbin Bernsen was in this?

It was a very small role as a character named Boy. Barely remember him in it. Haha.