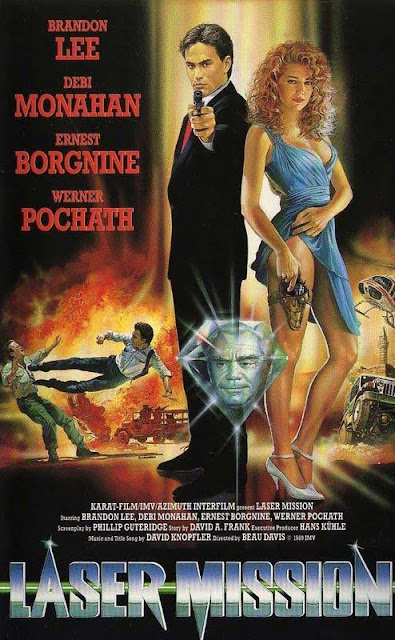 
Look at the above picture: Ernest Borgnine is IN the diamond. End of plot synopsis.

This laughably and lovably inept movie is just out and out silly - so take that as a solid recommendation. One of our readers, Gap, suggested we review this movie, and we always try to listen to our followers. Brandon Lee is charming as the CIA agent/mercenary who is a master of disguise named Michael Gold. There is a 526-carat diamond at stake called the Verbeek (?) diamond which will enable whoever gets it to build a powerful laser to take over the world. Naturally many bad guys are after him as he tries to rescue  Professor Braun (Borgnine) who has been kidnapped. His journey takes him from Cuba to the Namibian desert, with Braun’s daughter Alissa (Monahan) in tow.

There are inane action sequences involving shooting, blow-ups, guard tower falls, evil Germans, fruit cart chases and many other cliches, all done in what seems to be an unintentional cartoonish style. The “help the daughter find the kidnapped father” is a very American Ninja-style plot, and Ernest Borgnine’s accent comes and goes. The unnamed song, which repeats many times throughout the film (plus all the nonsensical goofiness) reminded us of White Fire (1984). The song is musically very reminiscent of “There’s No Easy Way Out” and the singer sounds drunk. Apparently it was done by David Knopfler, and his husky, amazingly slurred singing makes Bob Dylan seem like someone with perfect diction. 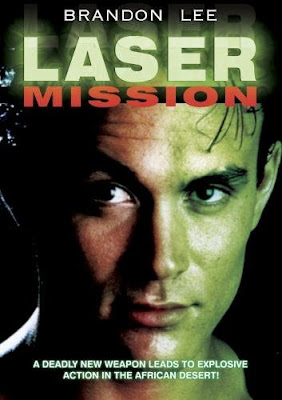 Laser Mission was done in the golden year of 1989. It was directed by BJ Davis, who has a long history in the stunt world. It has since fallen into the public domain and thus can be found in gas stations all over the world for about a dollar. If you see it, we strongly suggest you pick it up, as it is well worth that meager investment. Sure, the quality is blurry (even the SOUND is blurry) but it will provide entertainment and laughs. And isn’t that what movies are all about?

Laser Mission is a silly great time. We’d love to find more movies like this.

Comeuppance Review by: Brett and Ty
Posted by Ty at 6.6.11

Did Brandon Lee ever say "I'm on a mission. A LASER mission"? If he didn't, he should've. Love the poster.

That would have been awesome if he said that! The poster is great.

G. Gordon Liddy does say "The Soviet bloc is planning some sort of laser mission."

Haha! He does look like G. Gordon! It is one of the best lines of the movie.

I had a ton of fun with this one too. Great review.

Thanks DTVC! Agreed, this was a lot of fun. It had some great moments.

holy hell this looks right up my alley. nice one.

Thanks! You will definitely enjoy it, Marshall!

Great review. Love watching this film - it's a lot of fun and the soundtrack rocks. I'm not ashamed to say I've got a bootleg copy of David Knofpler's 'Mercenary Man' on my ipod. Good running track.

Where did you find that poster? That's frickin awesome! Backs up a lot of what a feel about this film - poor man's James Bond.

Thanks, Jack! That is super cool you have Mercenary Man on your ipod!

Haha, I just looked up Laser Mission poster on google and found it surprisingly quick. Ernest Borgnine is a real diamond in the rough!