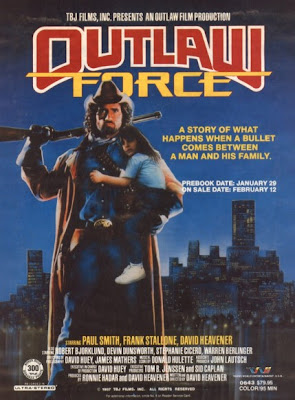 "A Story of what happens when a bullet comes between a man and his family."


Billy Ray Dalton (Heavener) is a simple family man and a “Cowboy of the modern day”, to quote Tesla. He loves his rural lifestyle, he loves fried chicken, and he fully lives up to his cowboy persona, putting on live Western stunt shows during the day and pursuing his country music career at night.

Dalton leaves the country and heads into the big, bad, mean and dangerous city streets of Hollywood. We then learn that Dalton is an ex-Green Beret and expert marksman, and he will stop at nothing to get revenge and save his daughter.

Meanwhile, Inspectors Wainright (Smith) and Grady Purella (Stallone) (did Heavener come up with that name?) are following the case. The “funny” part is, Purella is a glasses-wearing, rulebook-citing, suit-wearing liberal college boy  who loves yogurt and Wainright is an obese, rule-flouting, disgruntled, slovenly dude who loves nothing more than to chomp into the nearest burger. They’re the original odd couple! With the help of Jesse  (Mills), will Dalton emerge victorious, or will his plans and his musical career fall at the hands of the evil Washington (Bjorklund)? 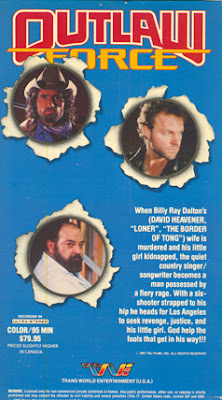 David Heavener wrote, directed, co-produced and stars in this “cowboy Death Wish” and makes the most of its rock-bottom budget. His buckskin fringed jacket is even more awesome than Steven Seagal’s. And Heavener was first with that style. Frank Stallone shows his range as an actor - compare his role here with his character from Fear - totally different. None other than Fritz Matthews is credited with special effects, but he doesn’t appear in the movie. Paul Smith as Wainright is a triumph, especially with lines like “leave the detective-ing to us”.

Sure, the many scenes of Heavener singing may seem gratuitous - but who can argue with such gems as “This Honky’s Gonna Honky Tonk Tonight”? Interestingly enough, the film seems to get more competent as it goes along - as this was Heavener’s first directorial effort, perhaps he was learning quickly on the job.

An amazing highlight of - not the film itself- but the TransWorld VHS tape - is a TV commercial that runs before the movie. It’s a “special TV offer” for the Outlaw Force soundtrack, available on cassette or LP! Remember when they used to advertise for 2-record sets on TV with a 1-800 number and it had a blue background? Call today for “David Heavener” at a certain P.O. Box in Marina del Rey, CA. Now you can have such songs as “I am the Fire” and the aforementioned Honky...right in your own home! What a great commercial! Heavener fans (I assume they’re out there) will want to check out the movie and commercial so get the TransWorld tape!

Speaking of awesome pre-movie commercials, you need to find a VHS of Curse II - The Bite. It has four previews on it that will blow your mind. Three of them would probably work for your blog so it's worth checking out if you can find it. I might still have my copy - I'll look.

Cool! Will look for a copy. Also thanks for looking yourself.

Ha! That tagline is epic. But seriously, that looks terrible.

You should check out Heaveners best films-Fugitive X: Innocent Target, it's a pretty well done Most Dangerous Game rip-off, Eye Of A Stranger, Prime Target and the Dragon Fury films were pretty entertaining as well.

It is a pretty ridiculous film! But Heavener is so wooden, it's hilarious.

Venom: Will definitely check those out. Always wanted to see Fugitive X.

I saw this a long time ago, and I remember the commercial! Great stuff! I'll have to check this one out again as I mix in a little more Heavener.

That is awesome that you remember the commercial! "This Honky is gonna Honky Tonk tonight!"