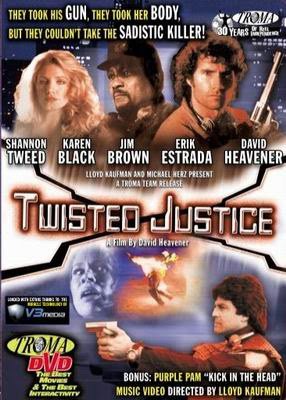 
In the year 2020, guns are outlawed, so as the saying goes, only outlaws have guns...one of which is L.A. cop James Tucker (Heavener), a cop on the edge who plays by his own rules - but, by his own admission, “I always follow orders”. Cops instead use a gun-like device called a “stinger”, which shoots tranquilizer darts. When a new drug hits the streets called “Umbra”, which negates the effects of the stinger, criminals run wild. One of which is a psychopathic serial killer/rapist called “The Bullseye Murderer”. Taking heat from all sides, will Tucker be able to neutralize this jerk?

Once again David Heavener is tracking down a serial killer (this seems to be the plot of most of his movies), but this time it’s in the future. You can tell it’s the future because of the wacky vests the heroes wear and the futuristic font used for some of the lettering in the movie. He wrote, directed, starred and did the music for this film. His charm goes a long way, and he assembled an excellent B-movie star-filled cast. Erik Estrada puts in a pleasantly-surprising amount of effort into a role he easily could have slagged off. Jim Brown is unintelligible as he mumbles/whispers all his lines. Karen Black is literally wasted in a nothing role that a much less talented actress could have done.  Shannon Tweed takes a break from her “erotic thrillers”, which is a nice change, but she’s under-used as well (she keeps her clothes on). Julie Austin, last seen in Night Of the Wilding (1990), appears here as well, alongside a bunch of other names such as James Van Patten (which they misspell in the credits) and Don Stroud. 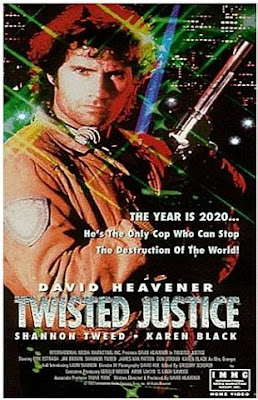 The interplay between Estrada and Heavener is a highlight, and Estrada gets arguably the best line of the movie when he describes The Bullseye Murderer as “A turbocharged Fruit Loop”. Clearly David Heavener proves his writing prowess with such a bizarre image. However, he shows some of his weaknesses as well with his blatant imitations of the great Stallone movie Cobra (1986). There are many lifts from Cobra on show here, not least of which is that Heavener is a quirky cop who drives a car and wears shades like Marion Cobretti. And there are also some apparent nods to Future Force (1989), of all things, as well: A loner law-enforcement dude of the future named Tucker that has a futuristic communications device in his car. So in the final analysis, Twisted Justice is like a cross between Cobra and Future Force, but neither of those movies have Freud (also spelled wrong in the credits) the Rat, in his only credited performance to date, sharing a donut with David Heavener.

While the movie could have used some more energy towards the end, especially needing another action scene or two in the final third instead of some talking, with a few minor tweaks, the movie could have been better, while still retaining its low-budget qualities. Unfortunately, this, as well as other Heavener DVD’s, were released by Troma. So the colors are washed out and it adds another layer of cheapness/junkiness where it REALLY isn’t needed. Troma DVD’s tend to suck, let’s face it, and a bunch of self-serving “extras” aren’t what the fans want. Not that I need to say it, but in case any potential DVD companies are reading this, we want as pristine a print of the original movie as possible, in its original aspect ratio, uncut. That’s all we really want. And maybe a trailer for the film. Thanks for reading this.

Heavener fans (there HAVE to be Heavener fans out there) will really enjoy this, as will fans of any of the stars involved. People with a low tolerance for junky-looking so-called “crud” movies won’t be so forgiving, but those people are lame anyway. Go Heavener!

Betcha didn't know that umbra is a Latin word that means shade or shadow and can even mean ghosts in the plural form. Perhaps Heavener is more educated than some may give him credit for.

Hmm, maybe he is more educated! He was a genius when he cast Erik Estrada as The Chief.

You had me at Eric Estrada. This one is probably ripe for a beer drinking game while screening it.

Haha. Agreed! Every time they mention that they don't have guns, take a drink!

Where the hell do you find these movies?? I have seen none of them let alone heard of them!!
I've only left one comment on your blog with The Exterminator. Great blog for the type of movies you watch! You must have some secret source where you keep coming up with such consistently obscure actioners!!...well they are obscure to me!

I wonder if there are even more misspellings in the credits that you didn't notice. That's awesome.

Excellent review, though. I've never heard of Heavener before, so I have some catching up to do.

You should review Future War. Unless you already did. I haven't looked at your archive yet.

Brent: Thanks! It is kind of a fluke that we find these movies. We used to work at a video store in CT and stumbled upon the hilarious films of Heavener.

Thanks for the kind words. There are a lot of Heavener films out there. They are all really horrible and funny at the same time.

We haven't watched Future War yet. Will have to pick up a copy.

Have you ever seen/heard of Warriors of the Wasteland? I don't know if it's actiony enough for your site, but it is mucho ridiculoso. You can find it in my archive if you need background.

Only have seen the MST3K version. Will love to see the uncut full feature. Fred Williamson is always great.

I've heard good things from people about this, and I love the idea of Erik Estrada and Heavener sharing the same screen. And I agree about the Troma transfers. I remember about ten years ago, when DVDs were first replacing VHS, Troma sold theirs for like $5 a piece, which was absurd at that time. Now we know why though.

Haha. If only Troma just remastered them a little better...They are a very lazy company.

Also: It was pretty cool to see Estrada and Heavener in the same scene!