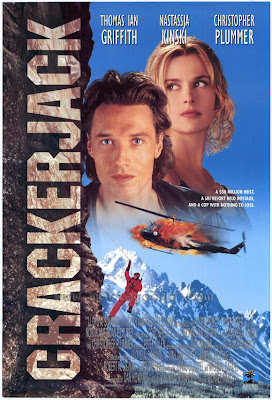 It’s Die Hard (1988) in a hotel! Following in the tradition of “It’s Die Hard in a ______________” (you fill in the blank) movies, Crackerjack has been said to be something of a cross between Die Hard and Cliffhanger (1993), but really it’s much closer to the John McClane side of things.  Thomas Ian Griffith stars as the awesomely-named Jack Wild, a Chicago Cop On The Edge. Does this seem at all familiar yet? His concerned family believes that he is too on the edge for his own good, so his brother Mike Wild (Sali), and his wife and baby all go to the rocky mountains. Why they thought that was a good location remains unknown.

While at a remote mountain hotel, a sinister plot to steal millions of dollars worth of diamonds is spearheaded by the nefarious Ivan Getz (Plummer) and his band of vaguely-European goons. Then they’re going to cause an avalanche to destroy the hotel, again with no rational explanation. Will the unmitigated power of Jack Wild stop the baddies, and romance “Activities Director” K.C. (Kinski) along the way? Just you wait and see! 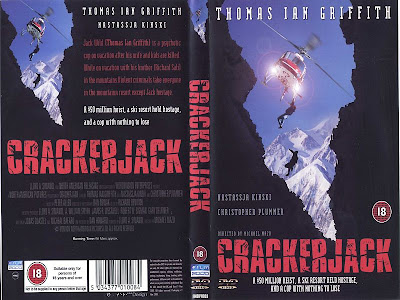 Actually this movie is not bad at all. It’s professionally made, entertaining, and is able to propel itself along on cliche-power alone. It’s one of the better T.I.G movies we’ve seen to date. He has a great entrance and the movie suffers when he’s not onscreen. T.I.G. is able to win over the audience with his charm, not to mention his fighting ability, and he carries the movie well. You genuinely like Jack Wild. When the classic 90’s baddies are holding the hotel guests hostage and shooting a lot of people and blowing things up, you root for Wild. You can’t ask for more in a movie like this. You’d be surprised how often filmmakers fail at this formula. Luckily, that did not happen here.

As far as Christopher Plummer is concerned, the only question you’ll have is, “why?” How did they get an actor of his caliber to appear in this type of product? I guess it wouldn’t be the first time, as he was in an AIP movie (Firehead, 1991), so this is gold in comparison. An actor’s gotta eat, and they probably told him this was his chance to outdo Alan Rickman, so he went for it. His acting style here seems to be “whisper a lot to seem intense and wear various types of eyewear”. We also felt Robert Davi could have played this role. 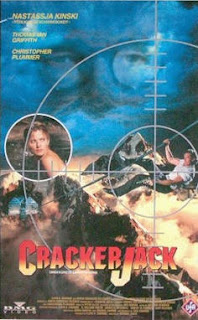 Oddly, there are not one, but two Crackerjack sequels, with different actors as different characters in the lead role. Was this movie that successful? We had no idea it made enough money to spawn sequels.  But such is life, and at least this first (and only “true” Crackerjack movie for the fans...just kidding) has plenty of entertaining violence to pass the time. That being said, things ramped up considerably when Crackerjack 2 came on the scene.

Shot in Vancouver, British Columbia, Canada, Crackerjack might be one of the more watchable Die Hard knockoffs around.

I'd had this one and its two sequels in my sights for a while now, glad that at least the first one is good!

I vaguely remember this one, but it looks like fun so I'll have to check it out again. Great stuff. And love the Christopher Plummer. In the same week you're doing a movie with him, and I'm doing on with his The Last Station co-star Helen Mirren, for which both were nominated for Oscars. Funny how that kind of thing works, huh?

Explosive Action: The first one is pretty fun. Always wanted to see the sequels. Love that Judge Reinhold takes over for Thomas Ian Griffith!

Yeah, this film was a blast all the way through, Plummer's actually been in quite a few DTV films, but he's always fun to watch. Crackerjack 3, despite having the great Bo Svenson nad Olivier Gruner, was a pretty meh film. Haven't seen the first sequel(which is called Hostage Train in the US BTW) but I definitely will ASAP as it has Judge Reinhold and Carol Alt.

Judge Reinhold is the action star we always wanted!

this one's in my queue for this month.

kinski was on a roll, from working with wim wenders to this and then with charlie sheen in the awesome terminal velocity

Kinski (and Charlie Sheen) were great in Terminal Velocity.

Also looking forward to your take on Crackerjack!

Did Jack Wild have a ne'er-do-well brother named Buck Wild? If not, can we petition the studio to film Crackerjack 4 - Buck Off! ...

Brilliant just got this on DVD the other day (with Judge Reinhold sequel! - can't wait to watch that one, his bizarro casting and gravelly voice in the trailer look awesome.)

Awesome! Definitely tell us how it is! Will try to pick up a copy soon.

Just ordered the R2 off Amazon UK! One I'll be reviewing for sure.

Crackerjack's back! I remember this one fairly fondly. I was a complete sucker for anything Die Hard on a ____ I'd say one of the better TIGs.

Definitely agree. This is one of TIG's best movies.

Out of all the classic scenes in this great film (now on Netflix) the best is when he punches his brother in the face for throwing him a surprise birthday party. Nothing defines a burned out cop more than that totally unreasonable assault.

Haha! That was a classic scene. TIG at his best.

What is the name of the hotel where the first movie was filmed?

Good question. Not exactly sure, but it's definitely in Canada.