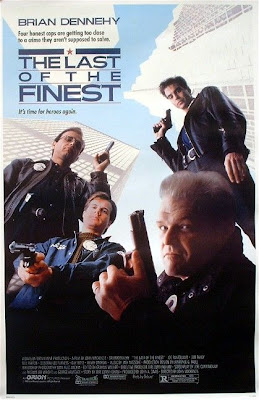 For those viewers out there that are sick of having just ONE cop on the edge, here we have FOUR - Daly (Dennehy), Gross (Pantoliano), Hojo (Paxton) and Rodriguez (Fahey). They are four lifelong buddies and they fight the war on drugs for the LAPD, with a little football against the DEA team in their leisure time. When the team of four is suspended for doing things their own way (the right way), they decide to go after the baddies themselves, the main culprits being the sinister Norringer (Boyd) and the slimeball Reece (Gwynne). When one of the team is murdered, the remaining three not only go rogue, but now they’re out for revenge - but department corruption from their higher-ups and a stash of 22 million dollars complicates matters. The conspiracy thickens when politicians grandstanding about the then-current events in Nicaragua get involved.  What will become of the...LAST OF THE  FINEST?

Last of the Finest is an extremely underrated and under-appreciated film. It’s a movie about the camaraderie and the brotherhood of the four main leads. And what killer leads they are - Dennehy is very real and likable as the world-weary Daly, Jeff Fahey is perfect as Rodriguez, Pantoliano is the somewhat nerdy but reliable Gross, and Paxton as Hojo is spot-on as well. Interestingly, it’s like The Shield before the Shield, as these guys are a sort of strike team as well, and even some plot points in this film bear striking similarities to ones on the first few seasons of The Shield. Could that be a coincidence?  Regardless, to have these four actors come together like this is truly a gift. For that reason alone, this movie should be more well known. 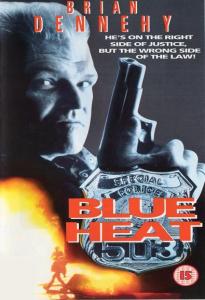 Most of the budget probably went to the top-flight actors on display, and there are some classic cop movie/TV show cliches, but they’re likable and inoffensive cliches. In fact, they pretty much have to be there so I don’t fault the movie at all, especially a movie of this quality, which is higher than a lot of the dreck you’ll find elsewhere out there (including on this site).

But it’s also a very human story with some good realism, especially the idea that these are good cops doing impossibly hard work in extremely dangerous situations, but the top brass and the pencil-pushers have no clue what goes on in the real world, but they’re always telling the cops on the ground what to do. That conflict drives a lot of the film (but not all of it). It seems very relevant, and it also makes for an exciting, interesting and highly watchable film.

The only question now is - when are we getting a DVD release?

This one was also a cable staple for me back in the day. I just can't get enough of Brian Dennehy in badass mode. need more badass.....less Cocoon.

I agree, this was a highly underrated and enjoyable, I think it actually did get a limited theatrical release.

Markus Welby1: Totally agree with you! Dennehy is always at his best when he is playing a tough-guy role.

Venom: Happy you agree. That's cool that it still got a small release.

Wow, there are a lot of good people in this. Looks awesome!

It is definitely a lot of fun to see these good actors working together.

Does Brian Dennehy ever head-butt anyone? I swear he has the biggest noggin in showbiz - that thing could take Chuck Norris out. OK, maybe that was an exagerration.

Haha so true!, unfortunately he does not head-butt anyone, but he really should!

Cool movie with a great cast of character actors, and most of them should have been much bigger stars.

Definitely agree with you!

What an excellent cast. Haven't seen this in forever. Definitely deserving of a DVD release. Great stuff!

It is definitely an amazing cast. also: thanks! Would be interested in your take on it.

wow! i remember loving this back in the day. i do remember seeing it at the theater also. i think the thing that i most remembered from it was the fact that dennehy was the lead in an action film, which never happened. lol. i love that guy!
great review man!

Thanks! Brian Dennehy is always entertaining. That is really cool you saw this in the theater!

This film is absolute stone cold classic. The comparisons to The Shield are totally accurate. This film represents a period where things were still relatively untainted by rampant political correctness. The abrasive language, the violence, the mantra of being a team and a man are all present. This particular ensemble of rogue cops is one of the best ever put on screen. All four of them are excellent. The final shoot out is a masterpiece and when Fahey screams out 'fuck you!!!' while spraying his rounds, well that sealed this movie's reputation once and for all. I miss these days.

Can't agree more about LOTF. It was a great time, so many movies of this ilk were coming out. We miss these days too. Happy it's preserved on film.