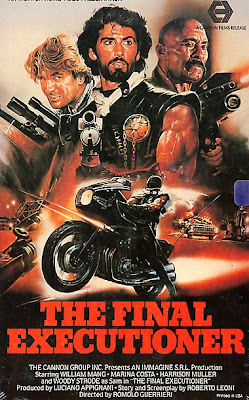 Surely anyone reading this site is familiar with Italian post-apocalyptic movies, and The Final Executioner certainly falls into that sub-genre, but it is a decidedly second (or perhaps even third)-tier entry. Just imagine 1990: The Bronx Warriors (1982) or The New Barbarians (1982) crossed with The Most Dangerous Game (1932) with a dash of The Rules of the Game (1939).

After the nuclear apocalypse, a class system developed. A privileged, non-contaminated upper class, and the radiation-contaminated masses. Presumably to do double duty as a really entertaining sport as well as cleanse the population of “undesirables”, the rich invented a game: “The Hunt”, where they let loose the unwashed masses and shoot them for fun. The upper, hunting classes consist of  Edra (Costa), Louis (Miracco), Evan (Zinny), Melvin (?) and the flashy, mercenary-style hunter Erasmus (Muller). One day, a disgruntled member of the underclass decides to fight back. After the baddies kill his wife (Bonfantini), Alan (Mang) becomes intent on revenge against the hunters. Being an intellectual and having no fighting background, Sam (Strode), a former New York City cop, extensively trains Alan in the warrior arts. Will Alan and/or Sam wreak vengeance upon those snobby “hunters”?

The director, Romolo Guerrieri, was a journeyman-type director, having worked in many different genres over his long career, delivering product to keep pace with the varying trends in Italian cinema. You’d think someone with his filmmaking experience would have noticed the weird, sluggish pace and nonsensicality of what he was directing. Perhaps he DID notice this, so he gave the film a lot of exploitative elements, plenty of sex, nudity, constant violence, shooting, chases, blow-ups and even rape. Amazingly, this film is still boring. It just goes to show, if you have zero character development, the audience cannot become interested no matter how much sleaze and violence you throw at them. 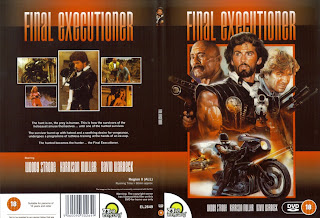 Thankfully, this does have most of the hallmarks of the Italian post-nuke world we’ve come to know and love: absurd dubbing, motorcycles and cars with crazy, “futuristic” appliances on them, unbelievably wacky costumes and the like. Interestingly, this also has a comment on the Italian class system, using the apocalyptic wasteland as a backdrop for it. Perhaps the filmmakers had Salo (1975) in mind, but the end product is junky and uninspiring.

But it does have a nice electronic score, and it is worth noting that the movie is called The Final Executioner, and there is a scene with a flamethrower, recalling the two Exterminator movies. Could that be a coincidence?

Released by Cannon, the VHS in the U.S. was put on shelves featuring the memorable silver big box. If you’re looking for a good example of Italian post-apocalypse movies, this is not a good example to start off with, but the presences of Harrison Muller Jr. and Woody Strode are among its redeeming qualities.

Personally I didn't mind the lack of character development, the film had more then enough fun to make up for it.

Great Review! This sounds like my cup of téa!

Venom: There were a lot of fun moments, but a lot of movie is pretty junky.

Hoaks2: It's not awful, but it could have been better. On Saturday we are posting the semi-sequel to this: The Violent Breed. That one isn't bad.

Jesper: Thanks! Would be interested in your take on it.

At least it had an awesome poster ...

The poster is pretty killer! If only it lived up to the poster!

Good stuff, Ty. Have you seen Warrior of the Lost World? That's another one worth checking out.

Thanks! We have seen Warrior Of The Lost World, but we should watch it again to review it.

There's another semi-sequel-cum-rip-off called BRONX EXECUTIONER, which rehashes about 60% of the scenes in this movie. I made a tidy profit last year, selling my (pre-certificate) VHS on E-bay.

That is a lot of re-hashed footage! Also that is cool you made a nice profit on the VHS.

Read about it here:

The DVD cover art you used, is from a slightly dodgy UK company (called 23RD CENTURY) that illegally released a stack of cool exploitation movies without propper certification or licences. They come in slim-line cases, and can be found in 'Poundland' shops. Some of their prints are ropey, but by and large, they sourced stuff from other legit masters. They released uncut prints of MASSACRE AT CENTRAL HIGH, BURRIAL GROUND, THE LAST HUNTER and THE BEYOND (plus a stack of 'Italian Cop movies')long before they were released uncut on legit labels.

That is very interesting! Thanks for the info! We will try to acquire some of those movies.

I've been meaning to get more Italian B (or Z) grade stuff up, as this is the kind of thing I grew up on in the 80s and 90s. The stuff from the Philippines is great too. I'm glad you gave this a complete review though, and didn't let any shortcomings go just because it's a bad Italian movie-- even these have tiers of watchability.

Love that you grew up on these movies. They are very watchable.