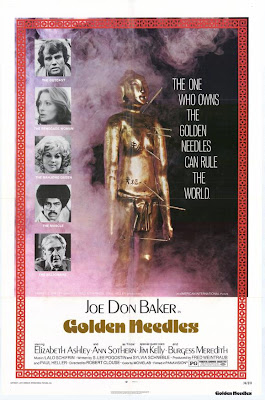 There is a statue that everyone is after, because inside it are the golden needles - acupuncture needles that, if placed in exactly the right spots on the body, can turn any man into a superman (according to the poster’s tagline, they can rule the world). Since Felicity (Ashley) isn’t willing to buy it for 250,000 dollars, she hires Dan (Baker), an adventurer based out of Hong Kong, to get it for her. He agrees, and brings on board his friend Jeff (Kelly) to help him out. But it’s not going to be easy, because everyone from Lin Toa (Chiao) to eccentric millionaire Winters (Meredith) is hot on the trail of this mysterious statue as well. Every trick in the book is used to obtain the statue, including inexplicable teams of guys in gold protective suits with flamethrowers torching where they think it is. Will Dan and Jeff prevail?

Man, we’re really getting tired of these PG-rated actioners. Not that there’s anything inherently wrong with that rating, but you can’t really pull out all the stops. While there are some fights and some intrigue, and even some mild torture (inflicted on legendary actress Ann Sothern of all people), the film lacks drive and is filled with...well...filler. 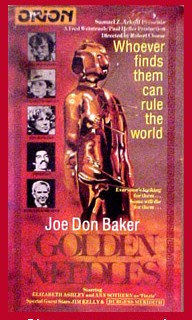 For example, Jim Kelly is painfully underused here. He doesn’t show up until 47 minutes in, and does one very brief fight. Even the end credits say “Jim Kelly’s Fight Sequence Choreographed By Himself." Fight SEQUENCE? This really shouldn’t be in the singular. There should have been multiple Jim Kelly fight sequences. But we are treated to some Joe Don Baker-Fu, and it’s nice to see him looking so young, and, by his standards, vigorous.

While the film is shot very well and has a nice Lalo Schifrin score, and does have a cast of familiar faces, it’s really hard to overcome the slow pace. It would be perfect for a young kid who wants to see an action-type film, but it seems a kid would be bored by much of the proceedings. So the film is caught in a bind. Yes, it was directed by Robert Clouse, who has a lot of famous films to his credit, but Golden Needles was not released on VHS (at least not in America) during the heyday of the video store, so it never had a chance to become a cult classic. Not that it definitely would have, but it never even got a fighting chance. This happened a lot with AIP (American International Pictures, not Action International) movies. I don’t know if it was rights issues or just bad business practices, but a lot of their movies didn’t get the attention they deserved during the VHS era. This was just one of those casualties, it seems. 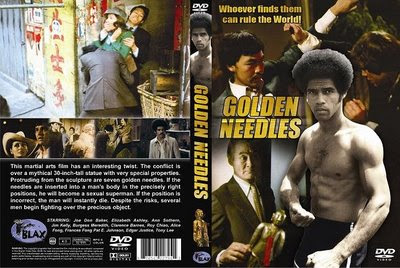 And, in the final analysis, despite the presence of Burgess Meredith and his awesome bowties, Golden Needles is Saturday afternoon stuff which left a lot to be desired and, sadly, is ultimately unsuccessful. It’s not without some merits, and we’ve seen much, MUCH worse, but ultimately it did not deliver the goods.

I've never even heard of this one before, it's a really odd cast Clouse managed to assemble for this movie.

Agreed. It was totally odd to see Joe Don Baker and Jim Kelly in the same scene.

Too bad this didn't pan out, the cast looked like a lot of fun-- though I only watch Joe Don Baker for the laughs, nit because I like him as an actor.

It is unfortunate. If only Jim Kelly and Joe Don Baker had more fight scenes, this would have been way better.

Too bad on this one - if a cast like this can't save it, who could?

Say Ty, what did you think of Final Justice? I actually thought that film was alot more fun then MST3K made it out to be, at the very least it's certainly better then this POS.