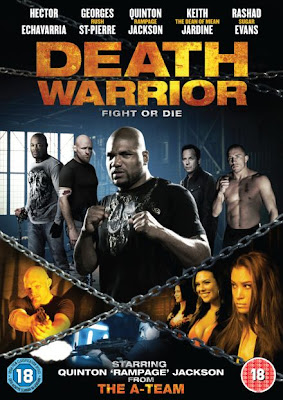 
Reinero, aka Ray (Echavarria) is a professional Punchfighter on the big-time Punchfighting circuit. His biggest rival is Wolf Jackson (Jackson). Fight promoters have been touting their upcoming battle, but Ray's wife Kira (Clarke) begs him not to do it. Ray, blithely unaware of any past cliches, says the classic line "just one more fight". Before the match can take place, gangster and self-described "businessman" Ivan Mikhailov (Mancuso) kidnaps Ray and injects Kira with a poison that will kill her in five days. Ivan forces Ray to Punchfight for his life against other meatheads while people bet on this activity over the internet on the website gladiatorchallenge.com. Will everybody love Ray? And can he extricate himself from this dire situation? 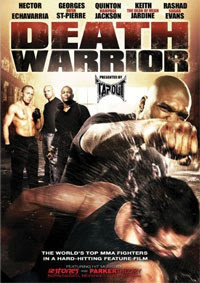 Echavarria is hilariously wooden, and he wears the same jacket with a yellow stripe for just about the whole movie. He does a lot of flying kicks. He's somewhat likable, but let's just say his fighting nickname of the "Rain Man" is disturbingly accurate. The rest of the cast is rounded out by monosyllabic meatheads with zero acting ability. Except, of course, for Nick Mancuso, who puts in an awesome performance. His over the top, bug-eyed yelling must be seen. He screams and spits all his lines. His energy is welcome, and his performance, which he easily could have phoned in but for some reason chose not to, saves the movie. 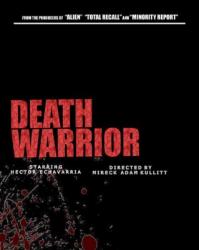 As always, this modern-day Punchfighter is TRYING, but there's too much nu-metal and ADD editing. Unlike Beatdown (2010), you can almost see the fights here for five seconds at a time. How far the fighting genre has fallen. Funny fighter names include Rexx, El Croco, The Shaman, and Kang Lai, who is a "Ninja Master" and, of course, "The Best". The following is a list of quotes from the movie:

"Death matches have been going on since the Coliseum. You were born for it."
"He has yet to taste defeat."
"No man has lived until you stare death in the face."
"When you're in a fight, you always get hit."
"I'm going to SLAY YOU!"
"I will rip your heart apart" ...and the all-time, laugh-out-loud classic:

"Someone's trying to infiltrate the MMA!"

Despite its shot-on-video look, Death Warrior provides a few laughs and Nick Mancuso at his best.

I think you were a little too kind to this film, I don't think it deserves more then half a star(and evne that's being generous), the fights were all tedious, the performances were weak(though you could tell Hector and Jackson were at least trying) and the directing was annoying like you said, this film dragged too much to really be funny, I would seriously rather watch Liberty And Bash and Heated Vengeance then to see this film again!

Totally agree. All the fights completely sucked. I only like the film for Nick Mancuso's crazy performance.

Haha, Heated Vengeance and Liberty and Bash were pretty awful too. Not sure we could sit through those again!

So, you're done with the TapouT movies now, right? What possessed you to do them all at once?

You're right, I am done with all the Tapout flicks.

They were sitting on my queue for months and i just wanted to get them out of the way. Haha.

Ooh, Death Warrior hurt, didn't it? All these Forced to Fight movies suffer from the same problem: the hero spends more time getting shoved around and beaten down by guards than he does kicking people's asses, and here might have been the worst, where only the clock forced Echevarria to suddenly be able to take out Mancuso in the last ten minutes. Agreed though that Mancuso was this film's saving grace.

It definitely hurt! Totally agree with your comment. The movie tries too hard to be old-school, but it ended up failing. Where was Matthias Hues when you need him?