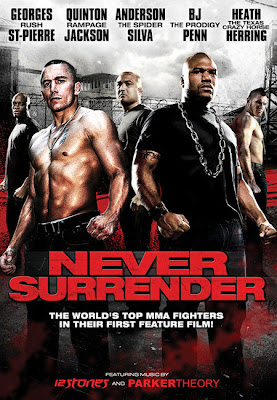 
"I found something worth fighting for."


Diego Carter (Echavarria) is a world-famous MMA fighter who is enticed by a mannish woman named Sandra (Koys) to join an underground Punchfighting circuit. It is run by the ruthless Seifer (Kilpatrick) - ruthless in the sense that what he's really running is a prostitution ring. He calls them "consorts", and if you win a match, you get a consort, or your opponent's consort, or something like that. It's all just a tawdry excuse to have Skinemax-style softcore porn scenes with plenty of unwanted, un-asked for Hector Echavarria nudity. Ew. All this nonsense leads up to "The Tournament", presumably the ultimate battle for the ultimate consort. Also, Carter falls in love with Sandra. What's REALLY going on? 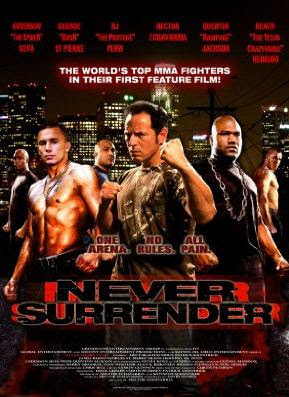 This movie is like a 90-minute training video for Hector Echavarria. Somehow he was allowed to direct this thing, and it has all the inept editing and strange cuts you might expect. You never see blows connect because there's an unnecessary cut right before the blow lands.Undue emphasis is put on the fact that he uses the late night-advertised product the Perfect Pushup in his training rituals. Echavarria invited all his fighter buddies to be in the movie, whether they belong there or not, and they even go by some of their real names.

In the beginning of the film, two burly men in shorts are grappling, grunting and sweating while a song with the lyrics "45 minutes of Loooove" plays. Then they grab each other's legs for the takedown. Wags who would decry these movies as homoerotic...may have a point here. 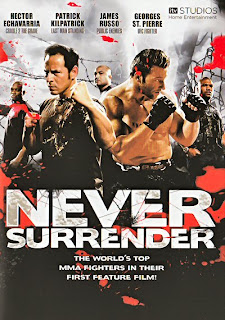 Also it should be noted that Diego's "...punches carry the dream of a small child who grew up off the coast of La Plata."

Naturally, The Tournament has "no rules and no referees", and Seifer notes, "is tax free". Is this a comment on today's political landscape? I know I go to modern-day Punchfighters for top-shelf punditry.

Patrick Kilpatrick looks like Howie Mandel now, and screams and yells just like Nick Mancuso in Death Warrior. However, this movie makes Death Warrior look like a masterpiece. James Russo is barely in it, which was a disappointment.On the bright side, Crusher's involved.

Overall, this movie is beyond dumb. Its structure resembles a brainless video game, but with more grunting.

Man you are killing yourself with these TapOut punchfighters. I don't envy you!

The biggest disappointment with all these Tapout flicks is that with just a little more effort and no quick cuts, they could be hidden gems.

Thankfully, there is just one more to post: Death Warrior, which was hilariously bad!

Total agreement, and when you think of a movie that did this paradigm well, To The Death, the unofficial American Kickboxer sequel, comes to mind. The only thing Never Surrender did for me was get the Corey Hart song of the same name stuck in my head.

Haha, it is a great 80s tune though. Also agree with your comment and we have a review of To The Death coming soon.

Death Warrior is one of the worst so-called "action" films i've ever seen, it's so awful it makes Total Force look like Hard Boiled by comparison.

On an unrelated note, you should definitely check out Machete ASAP! It'll more then make up for all these weak punch-fighting films.

So, you got any plans to review Machete?

Machete was a pretty fun flick! Hmm, not sure if we are going to review it, we have a huge backlog of reviews! lol

Well glad you liked it, what were your favorite parts?

Thought all the Seagal scenes were great. He should play more villains. Also loved the Tom Savini bit.

Let's see theres: Machete using a guy's intestines as a rope, Seagal's failed attempt at seppuku, death by lowrider, Robert De Niro's karmic death, and of course, Lindsay Lohan's nude scene(Really liked her performance BTW, i'd love to see her star in more films like that)

Those were all awesome scenes! Totally agree about Lohan too. She needs more roles like this. Less Herbies.

It's sad that this is genre is essentially just to sell DVD's to MMA fans. They are all just *so* bad.

I'm glad I'm not the only to find some not too subtle homoerotic overtones here - I love ragging my super-macho brother-in-law for being a wrestler. I prefer to do my sweaty rolling around with the fairer sex ...

Hoaks2: I definitely agree with you. These Tapout movies could be so much better. But they are lazily constructed.

Dr. Algernon: The proof of it being homoerotic is even in the soundtrack. "45 minutes of love?" WHY?