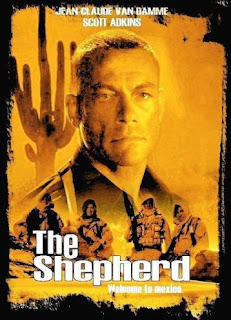 
Jack Robideaux (Van Damme) is a cop from New Orleans who comes to the small town of Columbus, New Mexico to start on their border patrol. It seems a gang of drug smugglers, including Karp (Adkins), are made up of former U.S. Soldiers gone bad. Now Jack, his partner Billy (McDonald) and Captain Ramona Garcia (Robb) have to get to the truth. Additionally, some folks in this dusty ol’town don’t take kindly to newcomers, so Jack, and his pet rabbit, also named Jack (there’s an explanation) must defend himself there from the locals. After some twists and turns in the plot, we finally get to the fight scene between Scott Adkins and Van Damme that we all want. Will human Jack and rabbit Jack get what they came to New Mexico for?

We’re happy to announce that The Shepherd is a winner! Overall this is a solid, entertaining, quality movie that delivers the goods. And why wouldn’t it, as it was directed by the capable and dependable Isaac Florentine, whose name is becoming synonymous with satisfying action creations. This movie really should have gone to the theater in America. Sure, there’s at least one scene that’s a bit too long, and there might be some other quibbles here and there, but this movie is prime JCVD all the way.

Naturally, Van Damme plays yet another guy with a French name. This harks back to past JCVD efforts, while references in the movie to hurricane Katrina, the war in Afghanistan, and of course, the issues surrounding the U.S./Mexico border firmly bring The Shepherd into current, relevant territory. It is somewhat lame that the bad guys are former U.S. Soldiers - what, they couldn’t think of any other type of person that could be evil? - but we get it, they are “rogue” agents and all that. But it’s puzzling why that’s the place the writers went to. 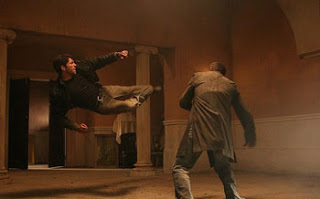 They even find time to sneak in some Punchfighting! Sure, it’s unnecessary, but who cares? It’s just fun. Of course, there’s the prerequisite torture scene, which is just another excuse for shirtlessness.

We love Scott Adkins, and he does a good job as one of the baddies, but we think he makes a better good guy. Someone we’ve always lovingly compared Adkins to is Gary Daniels, and it would be weird seeing him as a baddie (even though it has happened, mainly in the earlier part of his career). That aside, Adkins is a talented martial artist and has strong screen presence. His fight with Van Damme gives you what you want. They would team up again in the disappointing and inferior Assassination Games (2011). Also Van Damme has a pet turtle in that movie. Either a rabbit or a turtle, and Scott Adkins. But that’s where the similarities between the two movies end.

The Shepherd just goes to show that if you use Van Damme right, he’s still a viable star. This can firmly be placed in Van Damme’s win column.

Great write-up - sounds like fun JCVD. Have you ever seen Legionnaire? For some reason the box art reminded me of that one.

Thanks! I saw Legionnaire a long time ago, it was pretty good.

Yeah, thought this was fairly decent for a recent Van Damme flick. The story was a bit muddled and forgettable but the action was top notch. Isaac Florentine always delivers awesome action (Just watched Undisputed 2 & 3 at the week).

Apparently Adkins and Van Damme are reteaming for the next Universal Soldier flick AND Expendables 2. Good times!

Agreed! Looking forward to those collaborations!

Great stuff! Keep the JCVD reviews coming! I too thoroughly enjoyed this one. The Sheherd does for Van Damme what Pistol Whipped did for Seagal.

Thanks! We got another Van Damme review coming tomorrow.

Definitely agree about the Pistol Whipped comparison. Just watched that a few weeks ago. Also re-watched Urban Justice, which was a ton of fun! Reviews for those two coming soon.

Glad to hear he has another decent one in his repertoire worth seeing, but it saddens me that you do this before Lionheart....Death Sentence...or Double Impact! Don't even get me started on Hard Target! The end of October is a long way off!

Unfortunately, Lionheart is not going to be reviewed for Van Damme month.

But our Double Impact review is coming on the 19th and we have a review of Death Warrant on the site if you want to check it out!

No Lionheart? Damn you Comeuppance.....damn you all to hell!

We will definitely get to Lionheart eventually!

I actually had Shepherd in my to ten DTV flicks of the Oughts, so we're in total agreement here, I enjoyed it too. Maybe he and Florentine need to hook up again.

We completely agree here! Van Damme and Adkins are in good form and Florentine always raises the level of material he's working on.

Another Van Damme-Adkins-Florentine team-up would be awesome.