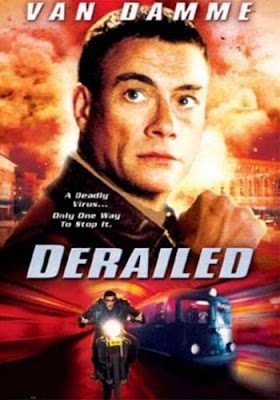 
Jacques Kristoff (Van Damme) is a family man with a wife, a son and a daughter. He is given a mission by his superiors to track down a mysterious woman named Galina Konstantin (Harring). As it turns out, Galina is hiding a deadly bio-weapon - a mutated form of smallpox enhanced with other, newer pathogens. This is discovered while Jacques is escorting Galina on a train from Bratislava to Munich. Things really get complicated when a gang of terrorists headed by Mason Cole (Arana) hijack the train and attempt to steal the smallpox. In the ensuing confusion, a vial is broken and it goes into the ventilation system of the train, making a lot of people sick. Not the least of which is Jacques’ family, who surprised him by showing up on the train. Can Jacques save his family, stop the bio-terror from spreading, combat the terrorists, convince his wife he’s not cheating on her with Galina, and save the train from getting DERAILED?

Unfortunately, Derailed is stupid, junky, and is just plain filler in the career of Van Damme. Sadly, despite the presence of Van Damme, this movie isn’t really much different from any other Nu-Image or Millennium production. It has loathsome CGI, including CGI sparks, and is edited from probably countless other sources (which would explain why certain things may seem familiar if you‘ve seen Direct Contact). Speaking of editing, there are a lot of dumb, unnecessary editing effects that call attention to the cruddiness of this production, instead of covering it up, which we assume was the original intention. 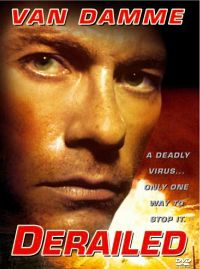 Basically this movie is a ripoff/mishmash of movies such as Die Hard (1988), Speed (1994), The Taking of Pelham 123 (1974), and even Strategic Command (1997). But the most obvious “influence” is surely Under Siege 2: Dark Territory (1995). Clearly messing with perfection, the filmmakers must have watched that and said, “the only thing that would make this better is if Van Damme was in it and not Seagal!” And while Derailed doesn’t add much new to the formula, it does have a cool scene where Van Damme rides a motorbike on top of the speeding train. But even this movie highlight didn’t live up to its potential.

Stunt coordinator Mike Kirton, who also worked with Van Damme on The Quest (1996), probably wished he was back working on Heat (1986) and Malone (1987) with Burt Reynolds in the good old days.

Also featuring a guy who looks exactly like Joe Don Baker as the stereotypical Texan, and the baddies in red berets and fatigues that are more common in Nu-Image movies than Star Wars stormtroopers, we can’t forget the main title rap song, which is catchy and it seems like the uncredited rappers must have watched the movie to formulate their lyrics. I wonder if they found it challenging to fulfill their mandate to write a rap about a movie that has more obvious miniatures than most kids’ train sets.

Derailed is not a standout moment in the storied Van Damme career.

Yeah, this is probably one of the bottom 3 Van Damme films. Really sluggish, uninterested performance from VD. Plot ripped off wholesale from Under Siege 2. And some really ropey sets and effects work. I have got it on DVD too, in a boxset with other films, but I doubt I'll ever watch it again.

Yikes! ha ha ha! I'll stay clear of this one then. lol.
You have to ask yourself, how many of these bad movies or ripoff's would never have been made had Die Hard never existed right? I love how it's the tent pole of these type of films like "die hard on a boat" or "die hard on a train". Was there ever anything similar to that type of film before that came out?

One more thing, as an 80's direct to video Burt Reynolds film, is Malone any good? I've always been curious and of course "want" it to be good as I love the guy but wondered if it was worth seeking out.

robotGEEK: That's a good question. It does seem that "Die Hard" knockoffs are an action sub-genre unto themselves. We have a joke referring to "Skyscraper", "Lethal Tender" and others that it's "Die Hard in a building!" Haha

As for your other comment, Malone is a lot of fun to watch, but you can't take it seriously.

Burt Reynolds shows so much contempt for the audience that it is a sight to behold!

This sure is one of the worst movies JCVD did, the bad effects made it even worse than it would already be without them. And i cannot understand why they put his dumbest face possible onto a movie cover.Shouldn`t the goal be to at least make the cover appealing, if the movie sucks? LOL.

Lol. Can't agree more. Plus it looks like they airbrushed his face to make him look 30 years younger. This movie truly earns him the nickname "Van Dumb".

I actually thought this film was pretty decent, though that might be because I have a soft spot for Die-Hard rip-offs, yeah the CGI's not that great and the plot is far from original, but it still kept my interest well enough, which is more then I can say for some of Van Damme's other efforts like In Hell, The Quest and Legionairre, all of which were complete borefests.

P.S. The Eagle Path FINALLY has a release date, unfortunately it's June 30th 2012, i'm not sure if that's just the UK release date and the U.S. gets it later that year or what, i'm just glad it's coming out.

"Die Hard in a Building" haha. There has be a backstory on why these Nu-Image movies have so many beret-laden baddies. I wonder if they inherited some defunct studio's wardrobe or something.

If this is Van Damme month, when is Pierre Kirby month?

Venom: A lot of "Die Hard" knockoffs are fun in their own way, but Derailed was very lazy. Van Damme looked disinterested.

The Quest review is coming tomorrow morning. In Hell Oct. 17th. Also that is very cool that The Eagle Path finally has a release date!

Matthew Conway: That is a fun idea! It would be a quick month. He is only in 8 films!

You want to see a "real" lazy Die Hard knock-off? Then check out "The Vault" with MMA fighter Bas Rutten, it's Die-Hard-in-a-museum(which "Face The Evil" AKA No Contest 2 did MUCH better BTW) and it's easily the worst rip-off i've ever seen and also one of the cheapest looking movies that i've ever seen, it's bad on so many levels that it makes all the other Die Hard rip-offs look like, well, Die Hard! It's THAT bad, so don't watch it unless you're a true masochist.

Haha, will definitely avoid that one! Always saw that on the Blockbuster shelf.

Face The Evil was a solid knockoff. Lance Henriksen put in his usual good work.

Yeah, not to mention we got to see Bruce Payne as the good guy for once. I too got The Vault from Blockbuster, along with another Bas Rutten film called The Eliminator, which was a Most Dangerous Game rip-off, and not a very good one at that, though compared to The Vault, it was actually pretty tolerable.

Heard The Eliminator was decent and at least it has Michael Rooker.

Yeah, Michael Rooker was a pretty fun bad guy in that film.

Cool. Will have to check that one out.

I thought this was fun, but nothing special, and I remarked too that this was Van Damme remaking a Segal picture, which isn't a good look. What was a good look was Laura Herring, one of the hottest female leads in a Van Damme flick.

Yes, Seagal isn't the best starting point to make an entirely new movie and even the presence of Laura Harring couldn't save this dud in our opinion.